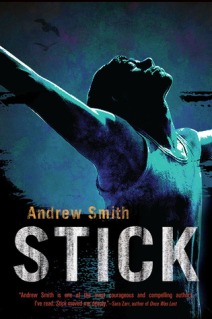 Plot/Story:
4 – Plot/Story is interesting/believable and impactful

Andrew Smith’s Stick is a powerful story about love and brotherhood.  Not since Brothers by Ted van Lieshout has there been such a touching, personal, and believable story about the bond between teenage brothers.  Stark (Stick) and his elder brother Bosten both have their individual burdens to bear, but they also must both fight the same battle against an abusive father and an unkind, dispassionate mother.  The main character, Stick, was born with a facial disfigurement, which has left him scarred physically and emotionally for most of his life.  It has caused him to believe that he is a disappointment to his parents (possibly true) and an embarrassment to his brother.  Just as Stick is coming-of-age, learning who he is (including how to handle himself around girls and women), he finds out that his brother, his idol, is gay.  Stick handles the revelation well, standing by his brother despite his own doubts and confusions, but the boys’ parents are not as understanding.  The fall out at home is too much, and both boys take off, separately – Bosten disappearing, and Stick gone to search for him.  Each of the brothers is forced to deal with distinct horrors while on the road, alone, both hoping to finally find a home, which turns out simply to be each other.

Andrew Smith’s characters are simply beautiful, even the horrid ones.  Characterization and character development are clearly strengths for this writer.  Stick and Bosten are impressively wrought:  their weaknesses are at times frustrating, as they should be, and their strengths shine through.   The way they develop simultaneously independent of one another, as well as together as a pair, adds a great level of complexity and interest to the story as a whole.  The minor characters, such as the boys’ friends, Emily, the Twins, Aunt Dahlia, Mr. and Mrs. McClellan, Paul and even the tertiary characters like Willie and the Truck Driver all have unique personalities and interact with the boys in genuine ways, so as to advance the plot fluidly and with purpose.  Little if anything seems out-of-place, all of the characters seem necessary and unquestionably purposeful to the story.

The second great strength for this book (and writer) is the prose –it is fluid, interesting, and meaningful.  There is much creative liberty taken with the book’s form and structure, which can sometimes be irritating (and which, admittedly, caused doubts in this reader at first); however, the structure breaks and style choices ultimately served the larger purpose of reflecting the mood of the story and its main character.  It was nearly impossible to put this book down, largely because the story was so interesting and the characters were endearing, but also because the prose progressed the story and its characters masterfully, from day-to-day, scene-to-scene.  The dialogue was well-written, the description was simple but effective, appropriate for the genre.

Two weaker spots in the story, for me, include the deeper, darker revelation about the nature of Bosten’s relationship with his and Stick’s father, and the book’s final resolution.  The former turns out to fit into a stereotypical “explanation” cliché, played out often in stories of this kind; however, in Stick, it is, at least, more subtle and not an all-encompassing “why” to Bosten’s state of being.  The latter issue, the resolution, is not a disappointment in terms of vision, but more so in execution.  The descent to which Bosten falls, after leaving home, seems quite far in such a short time, and for one with such strength of character.  Also, his return to “home,” given where he ended up, seemed almost easy or simple.  Either of these parts of the resolution could work, I think, given more time – the ending just felt a bit rushed, though it did not dissuade from the overall quality of the book, nor was it a disappointment in general; in fact, where the boys ultimately end up was a great and welcome relief, appropriate to their natures and journeys.  The larger themes of family, independence, fear, self-empowerment, and growth are all well-executed and come about in realistic fashion.

“’It’s better, I think, to have a “best friend” than a girlfriend,’ Dahlia said.  ‘Girlfriends are your friends because they’re girls.  But best friends are people you can share everything with and not be afraid they’ll leave you with less.’”

*Note – This review pertains to an Advanced Reader’s Copy, graciously sent to me by Andrew’s publisher at Feiwel and Friends, and imprint of Macmillan, at Andrew’s request. The book will be available to all on October11th, 2011.

← Review: The Agony and the Ecstasy by Irving Stone
Review: The Emerald Atlas by John Stephens →