Note: Those reading Dracula for our October Group Read, please be warned before continuing that there may be mild spoilers contained either in the review or in the Notable Quotes section below. 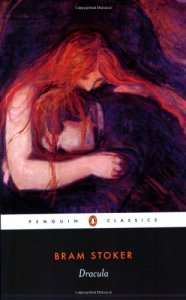 4 – Plot/Story is interesting/believable and impactful.

Characterization was the weaker element of Dracula, in my opinion, possibly because the novel was written in epistolary form.  Still, each character did get his/her time, as each of the main characters writings were present in the book (though some more than others – Dr. Van Helsing, for instance, sends a few telegrams and writes a memorandum, but he is present, for the most part, within the writing of others).  This creates much unreliability, for two reasons:  1)  One’s own personal writing, particularly that which has been written in retrospect, is not always going to be the most truthful and 2) One’s writing about another can also be biased, tainted, or under-realized.  The only way to avoid unreliability, though, is to have a third-person omniscient narrator, which would have utterly ruined this book – so the choice was a good one, ultimately.  The reader does see personality differences in each of the main characters and can begin to guess at how certain characters will react in various situations; also, dialect is handled well, particularly in the minor characters.  Stoker does allow a female character, Mina Harker, prominence in a heroine form which, at least for this reader, seems unusual for a horror/adventure story of the time – and it was a welcome exception to the rule, even if many of the stereotypical male/female dynamic elements were still present.

Dracula is written in epistolary form – a series of letters, diary entries, recordings, and telegrams composed by each of the main characters and compiled chronologically.  This method had become popular at the time, and Stoker likely took his cue from Fielding (Shamela), Collins (The Woman in White) and especially from Walpole’s The Castle of Otranto, which has a preface similar to that of Dracula’s, wherein the reader is told how very authentic the following documents are and in what serious regard they should be held. The effectiveness of the form in this book is largely due to the fact that so many characters (unreliable, all of them) are allowed their say through their writing – reactions on paper which come either at the time of events, or soon after, so that the story is almost told in the present tense.  Having multiple unreliable narrators, male and female, adds to the overall sense of ambiguity and self-deception of the novel, which likely mirrors its authors state of being (discussed further in “Additional Elements”).  The attention to dialect of the classes and nationalities was very well done, as was the prose in general.  I was not expecting Dracula to be a page-turner, even as a horror story.  What I thought would be lofty or oppressive prose turned out to be quite gentle, fluid, and engaging.

Dracula is similar to its contemporaries (Frankenstein, Dr. Jekyll and Mr. Hyde) in that the horror story is used as a canvas for discussing the burgeoning paradigm between advancements in science and traditional religious/superstitious belief systems.  It is a welcome surprise, however, that this is not the primary motive. There is something Stoker is hinting at and shying away from throughout the entire novel (something relative to what was happening with Oscar Wilde at the time, and related also to Stoker’s relationships with Henry Irving and Walt Whitman).  Stoker uses the fear element and the mystery element to advance his views on censorship (whether those views be freely expressed or a result of the narrowing times, it is hard to say).  Still, though the book, on the surface, is very much Christian-inspired, coming from a place of suppressed sexuality wherein sexual cravings are sinful, sub-surface it seems to be just the opposite.  This is the brilliance of the book: Stoker says what he needs to say, but hides, masks, or avoids what he feels is most dangerous – sex, be it heterosexual (the pornographic material of the day was coming under fire) or be it homosexual (manly-friendships and admiration were very much real for Stoker, and in the book he comes close to exposing it, particularly in the scene where Dracula tells the female vampires that Jonathan Harker belongs to him).  There is also a clever nod from Stoker that what has been “stamped out” of society (homosexuality/promiscuity/general sexual desire) has been “stamped out” in the character Dracula – but not quite.  A seed has been planted and allowed to grow in the child of Mina Harker, just as the seeds of ideas had been planted in Victorian minds and, though oppressed, must surely come to fruition someday.  All of these elements, which are the most important, are also the most guarded – and this is where the true sense of horror and mystery comes from.  Certainly, there are moments of terror and suspense in the book which are narrated openly, but the really exciting possibilities are below surface-level and are so much fun to fish out – it made the book much, much more than I expected it to be.

“The fair girl went on her knees and bent over me, fairly gloating. There was a deliberate voluptuousness which was both thrilling and repulsive, and as she arched her neck she actually licked her lips like an animal… I could feel the soft, shivering touch of the lips on the supersensitive skin of my throat, and the hard dents of two sharp teeth, just touching and pausing there.”

“’How dare you touch him, any of you?  How dare you cast eyes on him when I had forbidden it?  Back, I tell you all!  This man belongs to me!  Beware how you meddle with him, or you’ll have to deal with me.’”

“No man knows till he experiences it, what it is like to feel his own life-blood drawn away into the woman he loves.”

“With his left hand he held both Mrs Harker’s hands, keeping them away with her arms at full tension; his right hand gripped her by the back of the neck, forcing her face down on his bosom. Her white nightdress was smeared with blood, and a thin stream trickled down the man’s bare breast, which was shown by his torn open dress.”

“My revenge has just begun! I spread it over centuries and time is on my side.”

← Review: The Night Circus by Erin Morgenstern (With Bookalicious Pam)
Review: The Son of Neptune by Rick Riordan →