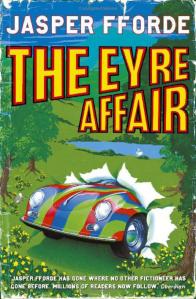 The Eyre Affair by Jasper Fforde

Thursday Next, Special Ops LiteraTec Agent, has a secret or two.  The biggest secret, perhaps, is that, as a young girl, she once met Mr. Rochester inside Bronte’s Jane Eyre.  In doing so, she changed the story slightly, making the meeting scene between Jane and Mr. Rochester slightly more interesting than it had been before.  Now, decades later, Mr. Rochester leaves the book to visit her – when she is in grave danger.  Hunted by and hunting the formidable Acheron Hades, the world’s most dangerous and devious criminal, Thursday Next comes to realize that she and Mr. Rochester are not the only ones who can jump from reality to fiction.  Acheron himself soon learns this secret – and it is up to Thursday to stop him before he destroys some of the world’s greatest pieces of literature forever, by visiting the original manuscripts and kidnapping their main characters.  After a beloved Dickens character is murdered, Thursday is given all the power and money the government can grant her, but will it be enough to stop Hades?  And who, of the many possible options (Thackeray? Shakespeare? Austen?), will be the next target?

Characterization is definitely a strong point for Fforde.  What makes this book stand out in regards to characterization is the fact that, not only does Fforde create his own characters, good and bad, who each have their own histories, relationships, quirks, etc. – but he also must re-imagine some of literature’s most beloved and well-known characters, making them believable in regards to their original works, but also relative to this story’s contemporary plot.  Fortunately, Fforde manages this quite well, and the outcome (Dickens and Bronte characters interacting with people from the 21st Century and 21st-Century folks visiting Victorian England?) is quite delightful.  Some of the minor characters, such as Thursday’s father and Bertha Mason, did tend to overshadow some of the primary characters at times, which was a bit odd.  Thursday, the main character and narrator, was one of the least empathetic, in my opinion, which made it at times difficult to enjoy the story (because, although the reader roots for her as the “good guy,” she is not exactly a champion).  Still, the characters’ stories overall are interesting, as are their histories (many are connected through distant pasts while others are new acquaintances who just happen to have excellent chemistry).  Hades is evil for evil’s sake, as are his henchmen, which is admittedly difficult for me to swallow (I like explanations for my bad guys!) but it works fine in this case, particularly since the primary character, at least, is flawed (if the good guy was purely good in addition to the bad guy being entirely evil, I would not have been able to enjoy the story nearly as much).

The best element of this story is the prose and style.  The story itself is a bit odd.  It is a mystery and a thriller.  It’s contemporary literature and it’s a throwback to the classics.  It’s fiction and it’s meta-fiction.  It is science fiction and realism.  What holds together all this craziness?  The writing.  Fforde is clever enough to realize that, with everything he is attempting here, a linear plot and limited first-person narration is the way to go.  It keeps the story grounded and keeps the reader engaged; all the while the story verges on spinning out of control.  The narrative voice is simultaneously witty and sincere – serious in what it aims to achieve, but light-hearted enough to poke fun at itself.  The reading level is probably high school, but even more experienced readers will appreciate what Fforde accomplishes – although a fun read, it is not necessarily airy.

4 – Additional elements are present and enhance the story.

The enormity of literary allusions will leave less experienced readers (particularly those who do not read classics or literary fiction) feeling a bit out of the loop (or simply missing out on what others are enjoying, without even knowing it).  As The Wall Street Journal notes, this book is “filled with clever wordplay, literary allusion and bibliowit” and it “combines elements of Monty Python, Harry Potter, Stephen Hawking, and Buffy the Vampire Slayer.”  What could be more fun for bibliophiles and the literati than reading a sci-fi mystery-thriller all about books?  How many of us would sacrifice ourselves to save the original works of our favorite author?  To protect our favorite book from permanent destruction?  The power of books – the danger of tampering with the classics – the sheer joy of finding oneself immersed in a literary mystery (who really wrote the Shakespearean plays, eh?).  The book was a joy – a page-turner- a carnival ride for book lovers.  This is the first book in a series that I definitely plan to continue reading.

“Religion isn’t the cause of wars, it’s the excuse.”

“I think that you could have used your vast intellect far more usefully by serving mankind instead of stealing from it.”

“No bond is stronger than that welded in conflict; no greater friend is there than the one who stood next to you as you fought.”

“Literary detection and firearms don’t really go hand in hand; pen mightier than the sword and so forth.”

“Ordinary adults don’t like children to speak of things that are denied them by their own gray minds.”

15 Comments on “Review: The Eyre Affair by Jasper Fforde”