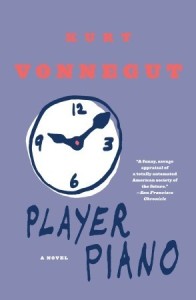 Player Piano is Kurt Vonnegut’s first novel, and one of his best.  It brings to mind all that is great about Vonnegut as storyteller and philosopher – reminding me of his masterpieces: Cat’s Cradle, Slaughterhouse-Five, and The Sirens of Titan. This particular novel is “Wall-E” meets The Moon is a Harsh Mistress meets Atlas Shrugged.  Americans have striven for technological perfection.  Decades and decades of mechanic improvements have resulted in the virtual elimination of manual labor of any kind.  The majority of Americans are out of work because machines have taken their place – and the only actual people employed are engineers – Ph.D.’s – with advanced I.Q.’s, the geniuses who run the factories.  All others, those who cannot get beyond the bachelor’s degree, are assigned to work either in the Army or with the Public Works departments (where sometimes twelve men will be assigned the job of repairing one minor pothole).  Because of these advancements, there is no poverty and no hunger.  The upper-echelon do have a certain prestige – they make more money, live on the “better” side of town, have nicer homes, etc; still, even the Average Joe has healthcare, regularly upgraded appliances, luxuries, and a retirement fund.  But with this comfort and mindless care – this forced apathy- comes the disillusionment of the American Dream.  Is having a good and simple life worth it, if you’ve done nothing to earn it?  Is a happy life possible, without satisfaction – without passion – without creativity?  What price can be placed on individuality, spirituality and the sense of self-worth – and can those ideals be traded in for unearned security?

Vonnegut’s stories are almost always more about the overall idea than they are about the characters or their journeys.  His books tend to be cynical, darkly comical visions of America – either as it is now or as he imagines it will become in the near future.  Player Piano is no different in this regard; however, Paul Proteus, the novel’s main character, does go through a certain change – he comes to realize that his purpose in life is the same as any man’s purpose, which further leads him to discover that that purpose and the self-actualization that once had been afforded Americans who were born to dream, had been stolen by the mechanization of society and labor.  There was nothing left to work for – nothing left to dream about, because everything was being handed out, regardless of merit and with very little effort on the part of the recipients.  Paul gradually gives up his privileged life – prodigal son of the nation’s newest “founding father,” to become an outlaw and outcast, a rebel, and perhaps a new messiah for the reclamation age.  Aside from Paul’s character, though, there is little growth or development in any of the characters – they are simply there, as Paul is there, to support Vonnegut’s overarching theme: the sacrifice of identity and self-worth for technological advancement and “quality” of life.

Regardless of whether or not I love a particular Vonnegut work, one thing I am rarely disappointed by is the prose or style of the piece.  Be it short story, essay, or novel, Vonnegut has a clever, witty, charming little voice.  His prose is swift and biting – intelligent but not self-indulgent; sarcastic but not pompous.  Vonnegut loves to take jabs at humanity in general – there’s a sense that he has given up all hope for any redemption whatsoever; the shit has hit the fan and so it goes.  Player Piano meets these typical Vonnegutian (?) criteria.  The story flows well – there’s a comic seriousness to the prose, as if the story, like life’s story, is one great, big tragedy – we can either laugh or cry (sometimes both).  This, though, is one of Vonnegut’s better stories and, because the story is so good, the typically good prose elevates even further – making the entire experience, from meaning to impact, a positively enjoyable (if rather depressing) one.

Vonnegut is a cynic and a realist.  As one who narrowly survived the bombing of Dresden, he has plenty of real-life experience to bring to his writing, and one can hardly fault him for seeing the darker side of humanity.  Still, he approaches that darker side with a seriously powerful sense of humor.  Even though he clearly has little hope that humankind will redeem itself, he still manages to poke fun and to approach life with a quirky, disillusioned mirth – something that should be quite impossible.  Player Piano is in some ways the light-hearted antithesis to Atlas Shrugged.  It is the realistic interpretation of a mechanized, wholly capitalist, time-is-money-is-everything world, and what living in that world would do to the human spirit.  The book explores the polar-swing from the traditional idea of the American Dream, where the Everyman can amount to anything, to an America where lethargy, stagnation, and status quo are king.  Gone is the farmer, the waitress, the shopkeeper, the mechanic – nearly every imaginable job has been replaced by a more efficient, cost-effective, mechanized employee, and while the result is a world where everyone is secure – where everyone has a home, insurance, transportation, food, clothing, etc., no one has real liberty or purpose.  Dreams and ambition are antiquated.  The final frontier is bunkum.

“I want to stay as close to the edge as I can without going over.  Out on the edge you see all kinds of things you can’t see from the center.”

“In order to get what we’ve got, Anita, we have, in effect, traded these people out of what was the most important thing on earth to them — the feeling of being needed and useful, the foundation of self-respect.”

← Review: The Adventures of Sherlock Holmes by Arthur Conan Doyle
Review: The Woman in White by Wilkie Collins →