Review: The Autobiography of Mark Twain 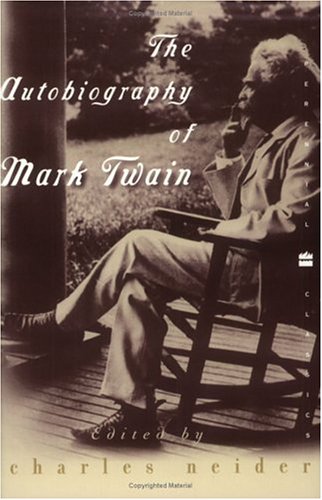 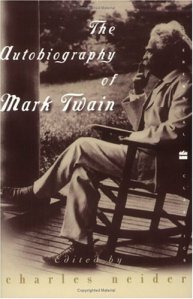 The Autobiography of Mark Twain

Charles Neider considered Twain’s Autobiography to be “a classic of American letters, to be ranked with the autobiographies of Benjamin Franklin and Henry Adams.”  While I haven’t read the Adams autobiography, I absolutely agree that Twain’s is comparable in importance and substance to that of Benjamin Franklin; and, as The Modern Library says, it is probably “one of the best 100 Nonfiction books of the 20th Century.”

One of the benefits of reading an autobiography, and their primary appeal for most, is that they allow readers an opportunity to learn more about a historical figure’s life and work – things that could only be guessed at or inferred by reading their fiction, watching their movies, examining their politics, etc.  Twain’s autobiography fulfills this promise, in that it reinforces what one might learn about him through his fiction, but also reveals so much more about his private life, his personal ambitions, and his deep, deep pains.  Most who are familiar with Twain’s novels know that he was considered (and is still considered) to be one of America’s greatest humorists and satirists.  But Twain did not look at himself that way – he believed himself to be a moralist and a sermonizer – one who allowed humor into his stories when it occurred naturally.  Twain cared deeply about the human race, but was also so disappointed by it.

When reading Twain’s works in chronological order, it is clear that the nature of his texts change over time.  In the beginning, his stories can be characterized by a youthful innocence – a playful, all-American view of the world (The Adventures of Tom Sawyer).  The future stories become more complex and delve into more delicate territory (Adventures of Huckleberry Finn; The Prince and the Pauper) when he begins to look at race and class issues, social and economic inequalities.  Ultimately, his late works are almost despairing in nature – the early hopefulness and joyful themes becoming distilled, to say the least (The Mysterious Stranger).  One might wonder why – but the Autobiography explains.  Twain had been a trusting, almost naïve person for most of his life.  He put his finances into the hands of publishers and lawyers who would ultimately betray him.  He speculated and invested in “certain” ventures, only to watch those ventures disappoint and nearly ruin him financially.  In addition to his financial losses and the deceptions he endured, he also suffered through the loss of many of his closest friends and family – including his wife and three of his children.  Twain even felt personally responsible for the death of his only son, who died an infant.  These losses and disappointments seemed to haunt him throughout his entire life and, throughout the Autobiography, there is a heartbreaking desire for death – a respect and appreciation for it which only one who had suffered enormously could truly feel or understand.  Repeatedly, throughout the passages, Twain describes bluntly his envy for those who have passed on from this world and expresses an anger toward those who helped him survive, when he himself was at death’s door.  It is a private despondency not often exposed in his public persona or in his writing.

Ultimately, I found Twain’s Autobiography to be wonderful and painful.  Anyone who is already a fan of Twain’s writing will certainly enjoy this text; however, conversely, those who do not enjoy his books may have difficulty with this, because his style and approach in narrative and essay form are similar (also some credit must be given to the editor, Charles Neider, who put some structure and organization into this edition of the work – Twain had dictated the entire thing, so its original form was far from fluid or cohesive).  It was incredibly rewarding not just to learn more about the man and his private life, but also about his writing process, his relationships with other prominent writers and figures of the time (William Dean Howells, Ulysses S. Grant, Rudyard Kipling, Robert Louis Stevenson, and Bret Harte, in particular).  Baring witness to some of the more intimate moments and relationships – especially, for instance, Twain’s friendship with General Ulysses S. Grant, adds so much to my appreciation of Twain as a person.  Similarly, witnessing him lose his cool and blast certain people who he held in the highest contempt is, of course, hilarious.  Twain clearly tried his best to be respectful and considerate of all people (at least in his adulthood), so when those rare moments occur when Twain describes dealing with people he truly despised – it is a (guilty) pleasure to witness! 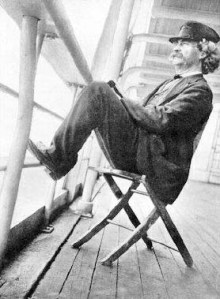 For fans of Twain – do yourself a favor and read his Autobiography.  As much as I thought I knew about Twain, I now realize that I can approach his works with a deeper and renewed appreciation.

“It is an odd and curious and interesting ass, the human race is.”

“When I was younger I could remember anything, whether it had happened or not; but my faculties are decaying now and soon I shall be so I cannot remember any but the things that never happened.”

“Where prejudice exists it always discolors our thoughts and feelings and opinions.”

“It seems a pity that the world should throw away so many good things merely because they are unwholesome.”

“Doctor Meredith removed to Hannibal by and by and was our family physician and saved my life several times. Still, he was a good man and meant well. Let it go.”

“But who prays for Satan? Who, in eighteen centuries, has had the common humanity to pray for the one sinner that needed it most…?”

“I have always preached. That is the reason that I have lasted thirty years. If the humor came of its own accord and uninvited I have allowed it a place in my sermon, but I was not writing the sermon for the sake of the humor. I should have written the sermon just the same, whether any humor applied for admission or not.”

“It is the will of God that we must have critics and missionaries and congressmen and humorists, and we must bear the burden.”

“I was not able to convince her that we never do any duty for the duty’s sake but only for the mere personal satisfaction we get out of doing that duty. T he fact is, she was brought up just like the rest of the world, with the ingrained and stupid superstition that there is such a thing as duty for duty’s sake, and so I was obliged to let her abide in her darkness.”

“The sweet placidity of death! It is more beautiful than sleep.”

Read as part of the Victorian Celebration

← Books and Loss (In Memoriam)
Review: Cranford by Elizabeth Gaskell →

7 Comments on “Review: The Autobiography of Mark Twain”