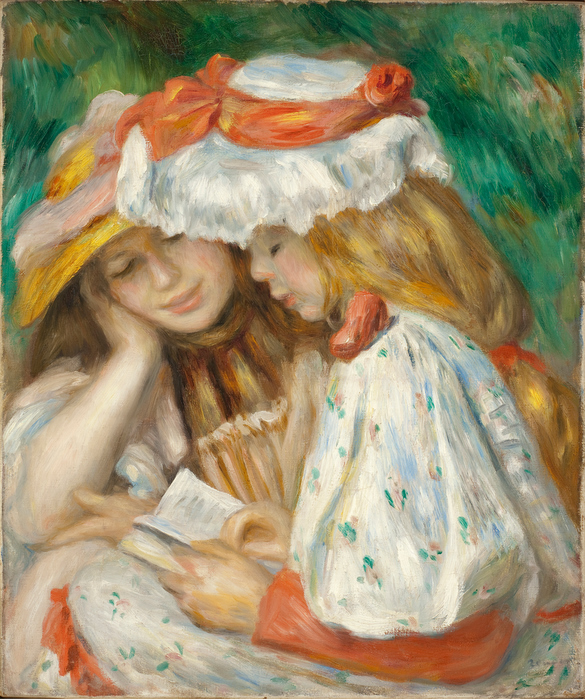 Carina is a 20-something teacher from Toronto, currently living and working in Abu Dhabi. She blogs over at Reading Through Life, mostly reviewing what she reads and discussing other book-related things. She “came out” for the first time at 14, and has never looked back. Though the labels she chooses to use have changed, they’re really just words that attempt to describe a fluid and complex identity. Nobody’s ever suggested one label that encompasses everything that matters most to her, so she usually just omits them entirely and lets people figure things out on their own.

Depending on who I’ve spoken to, my experience with queerness[1] is either pedestrian or extraordinary. Somehow, this is the first time that I’ve really and truly told the whole story, including the literary encounters that helped to shape my early self-image.

I first knew that there was something different about me when I was maybe in 4th or 5th grade. I remember sitting outside during recess with a bunch of girls, watching another group of kids playing soccer. Now, I didn’t really like soccer, mind you, but watching other people play across the school grounds was fine. The other girls that I was sitting with were ogling a couple of the older boys – maybe 7th or 8th graders. They were making comments about who knows what, maybe their cute faces? We were pretty innocent back then, and I can’t imagine that anything they found attractive then would be the same as things we would find attractive even 7 or 8 years later.

“What about her?” I remember saying to them, pointing at an older girl. They were quiet pretty much immediately. It was clear that I’d said something wrong. After an awkward silence, someone else pointed out another older boy, and it was pretty much as if I’d never said anything.

But even though the experience taught me not to voice my opinions on the matter in the future, my eyes were still caught just as easily by girls as they were of boys. Since it had become clear that my friends thought that was weird, I didn’t say anything to them. And I’d never even heard of people being gay at that point, except in the meaningless slurs flung around the schoolyard by children. Despite the fact that I was born in the mid-80s, I went to Catholic school, didn’t have cable television, and my parents heavily vetted the movies we rented, so it didn’t occur to me in the slightest that there were other people like me.

That is, until I went to high school. I had my first girlfriend when I was in 9th grade, and was opened up to another world. One that was interesting, and where I found some people who seemed a little bit like me … but I still didn’t really feel like I was “normal”.

Skip ahead to grade 10. I don’t know about in other places, but in our school district, we read one Shakespeare play every year in English class. In my school that year, some of the classes read The Merchant of Venice and the others, like my class, read Twelfth Night. I probably don’t need to tell you that this play was the first experience of sexual otherness that I experienced in literature. Twelfth Night opened up to me a new world of people living as the opposite gender, and of same-sex lust – or, at least, people who seemingly fell in love with people of the same sex on the surface.

Now, this wasn’t me, exactly, but it was something outside of the heteronormativity that I was surrounded by. It was a start!

The following year, we had to choose books from a list to read independently. We only had to choose one book, but (being me) I bought and read more than that. I have struggled for years to remember the title or author of the book I read and wrote about in my report, but I can’t. What I do remember is that there was a female protagonist, that she spent most of the book in a relationship with a man named Mike … and that she was sexually active. This, on its own, was a first for any book that I had read. There was sex! And not only that, but she also had a sexual encounter with a woman. Finally, I was reading a book about someone like me, who was attracted to people from “both” genders[2], even if I wasn’t actually doing much about it at that point. And I started to feel a little bit less like a freak, because now there was Written Proof that there were other people like me out there, people common enough to have books written about them.

Another one of the books on the list was Fall On Your Knees. (Seriously, I think my grade 11 teacher must have been a bit subversive; I have no idea how she managed to get these books approved by my very conservative, very Catholic school administration.) This book has stuck with me for all these years as yet another book that treated “other” sexuality as just as valid and normal as any other relationship. I seem to remember not realizing that one of the characters in a courtship story arc was female for a while – and was pleasantly surprised when it turned out that she was, because it meant that everything could be just the same for her and her female lover as it could be if she had been male.

After that, it wasn’t until university that I managed to encounter another queer character in a book. Those later books simply reiterated what I had learned through earlier experiences – that there really were people “like me” out there. These books also taught me about the breadth of these identities and experiences, often long before I had managed to come across them outside of books. They helped me to be both more accepting of myself and of other queer people when I met them, because I felt almost as if I already understood them in some way.

In retrospect, I’m both thankful for these experiences, and sad that I wasn’t exposed to more of them. I would’ve loved to have read a book like Boy Meets Boy or Empress of the World when I was a teenager. Reading age-appropriate books that discussed queerness, curiosity about sexual identity, and the specific issues that affect queer teens, would have made me feel even more comfortable in my own skin.

But in the end, I’m grateful for the self-acceptance that these books brought me, the knowledge that I wasn’t so strange, that there were other people like me in the wider world. This knowledge helped me through many a crisis, reminding me that I wasn’t alone. That my identity didn’t make me any less normal, just not the same as everyone else.

If I was going to be a “freak”, at least I knew there were others out there. That made all the difference.

[1] I use the word “queer” to denote any sexual identity that varies from the heternormative, cisgendered “ideal” presented by society and the media. If you’re interested/confused, here’s some (very) basic information on the word “queer” and why some people – like me – choose to use it.

[2] This is obviously long before I became politically and sexually conscious enough to reject the idea of two distinct and obvious genders.