Review: Play It as It Lays by Joan Didion 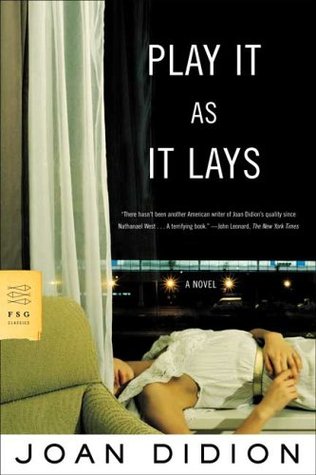 Joan Didion’s Play It as It Lays is included in Time magazine’s “100 Best English-Language Novels from 1923 to 2005.” The protagonist (although, from here out I may call her simply “main character,” as protagonist implies a positive agency of some sort) is Maria Wyeth, a disillusioned, mentally troubled, emotionally scarred 31-year-old woman.  The story begins at the end, with Maria writing down episodes from her life in an attempt to reconcile certain events and to heal, mentally and emotionally (think Catcher in the Rye).  The crux of the story seems to be Maria’s lack of purpose in life, coupled with the loss of her daughter (who is alive but who has been institutionalized, something Maria likens to a type of imprisonment).  The primary conflict is Maria’s desire to reconnect her daughter, to bring her home and take care of her, but it is usually clear that, even if Maria were to gain custody of her daughter again, there’s no way she would be in a condition to care for her, or for anybody.  The story’s resolution can be read in two ways, either as hopeful or as perpetually doomed – arguments for both readings can absolutely be made (and this is, perhaps, an Americanized complexity –or playful approach- to the French Existentialist problem).

Most of the narrative time is spent with Maria, which makes sense as she is writing a journal of sorts, remembering certain events from her own life.  She comes across as submissive, physically and sexually, to strong male characters; but, the irony is that she truly admires strong females, such as a powerful Italian woman she reads about in a magazine, and also the resolute character she herself plays in a minor movie.  All of the other characters are minor ones which serve the novels larger purpose, which is to expose a type of American existentialism, wherein all meaning and purpose in life has been lost (or the meaning of life, which is that there is no meaning, has been discovered).  The thing to take away from these characters is the sense of resignation to a disappointing fate – a theme present in other “Hollywood” novels, such as West’s Day of the Locust and Fonte’s Ask the Dust.  There is a clear commentary on Hollywood culture (fake, detached, sad, and superficial) and also on the realization that the great west, the final frontier, is gone, leaving nothing left to be discovered, no hope to cultivate, and no dreams to believe in.

Most of the novel is made-up of short, episodic chapters of stringently controlled third-person narration which is strengthened by rather visual and biting prose.  Near the end of the novel, the third-person chapters are interrupted by very short first-person reflections, inner-monologue of a sort, which represent Maria’s emotional awakening and new (or relearned) consciousness.  Maria Wyeth is, for most of the book, emotionally disconnected and sees things in simplistic ways.  This suits Didion’s style, one which is clearly inspired by Hemingway (Didion’s literary hero), Fitzgerald, and other American modernists, particularly those of the ex-patriot Lost Generation.  The reductive, sparse prose is striking and powerful, particularly in the most intense moments, such as the description of Maria’s abortion and the suicide of Maria’s friend.  These types of scenes would traditionally be either inferred, but not described, or described in detail (with or without metaphor – but in a highly descriptive way).  Didion lays them out in a bare, straightforward way, which make them all the more real and terrifying.

For such a sparse novel, it is absolutely littered with meaningful symbols and motifs.  The most obvious and recurrent of these is probably the rattlesnake.  As would be expected, they’re typically present in times of danger, but they also represent the male dominance, mimicked in Maria’s relationship with all men in this book (men who are ultimately responsible for the destruction of female relationships and the separation of mothers and daughters).  There is also the symbol of the Hummingbird, which might represent Maria’s re-awakening to “real” life and emotions.  There are many times throughout the book where people, Maria and others, feel suffocated by “fake” items, such as an artificial lemon (which someone almost eats) and plastic plants, which Maria believes suck away the oxygen, rather than giving off oxygen as actual plants would.  This is clearly another indication of the suffocating non-reality of Hollywood life, where everything is a copy of a copy of… etc.  There is also the motif of the freeway/roadways and Maria’s attempt to find meaning and direction by driving aimlessly which, in true existential fashion, does not work.  Games, gambling, and “playing” work in the same way that plastic copies of living things do, in that they are moments which pretend to be meaningful real life events, but which are actually avoidances.  Other things to look for are the presence and meaning of dreams, the nature of madness, and Maria’s obsession with whiteness and cleanliness.

“What makes Iago evil? Some people ask. I never ask.”

“I am not much engaged by the problems of what you might call our day but I am burdened by the particular, the mad person who writes me a letter. It is no longer necessary for them even to write me. I know when someone is thinking of me. I learn to deal with this.”

“By the end of the week she was thinking constantly about where her body stopped and the air began about the exact point in space and time that was the difference between Maria and other.”

“One thing in my defense, not that it matters: I know something Carter never knew, or Helene, or maybe you. I know what “nothing” means, and keep on playing.”

5 Comments on “Review: Play It as It Lays by Joan Didion”