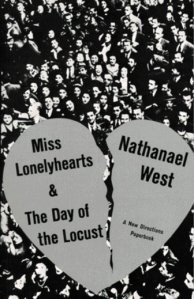 Miss Lonelyhearts is the journalistic pseudonym for a male newspaper man who aspires to have his own gossip column.  The reader is never told his true name, but it is his journey we follow.  Miss Lonelyhearts has a deep and profound faith in Christ and Christianity.  He becomes depressed by the letters he receives on a daily basis, from sad, sick, abused, and lonely men and women who are seeking his advice.  He believes that Christ is the answer but is continuously mocked by his editor, Shrike, who derides his religion and who believes that art is the true answer. Miss Lonelyhearts has a stone where his soul should be – coldness where he should have passion.  He relieves the ache of this by attempting to make love to women, his own girlfriend as well as others (even having affairs with his boss’s wife & some of his faithful readers).  These affairs, coupled with his inability to connect with other people, will lead to his disillusionment and demise.

In addition to Miss Lonelyhearts, who is the novella’s main character and Christ-figure, there are a few others who complete the cast.  First is Shrike, Miss Lonelyhearts’s editor – Shrike is a womanizer, a hedonist who lives for pleasure, though he cannot get any from his wife, and, essentially, the novella’s anti-Christ (though he survives and thrives, interestingly enough).  Shrike is married to a virginal woman named Marry, which is kind of hilarious, if a bit heavy-handed.  Betty is Miss Lonelyhearts’s fiancée and she represents the good, the naïve – the sheep, if you will.  She praises the country and hates the city, believing it to be the cause of Miss Lonelyhearts’s anxiety and unhappiness (or illness, as she calls it).  In addition to these are Mrs. Doyle, the story’s Mary Magdalene, and her husband Mr. Doyle, a cripple who Miss Lonelyhearts attempts, and fails, to heal.  The rest of the cast are made up of minor characters, such an elderly homosexual man (whose presence exposes a bit of the early psychoanalytical obsession with homosexual “perversion”), the letter-writers who turn to Miss Lonelyhearts for help, and some co-workers at the newspaper.  West knows what he is doing with his characters and, aside from the letter-writers who all tend to write the same way, despite having different backgrounds and problems, most of the characters serve a distinct purpose and come across with believable, individual personalities.

West’s prose is raw, graphic, and emotionally American.  His narration is swift and to the point, with moments of high and romantic description employed at appropriate intervals.  The dialogue is believable even when certain of the situations are not, but the scenes where Miss Lonelyhearts is alone in his room and coming to terms with his fanaticism (he admits to needing to hold himself in check or risk losing himself completely to an obsessive, extreme  zealotry) are the most poignant of all.  The incorporation of letters from the newspaper audience allows for a broader view of the American disillusionment, without necessitating the inclusion of too many characters which, in a novella of approximately 65 pages, is both necessary and effective.

Nathanael West’s works are deeply concerned with Depression-era America.  He, like John Steinbeck, wrote stories about the American Dream and how truly unachievable that dream was.  Unlike Steinbeck, however, West’s characters are not compassionate – there is no one to root for and, in fact, many are masterful grotesques.  He follows in the footsteps of Sherwood Anderson, creating characters who are less individuals than they are the embodiment of a seedy, disappointing element of humanity.  West was a Hollywood screenwriter and novelist and, coincidentally, died the same weekend as his good friend F. Scott Fitzgerald, another Hollywood novelist who explored the darker, disappointing side of the American dream.  Miss Lonelyhearts, though short, packs a punch.  West ironically employs the literary Christ figure, as he does in Day of the Locust and, in both books, it is a failed Christ and a failure of Christian faith in general being presented.  SPOILERS FOLLOW: Miss Lonelyhearts himself goes through Christ’s journey (three days of “death”, a “Last Supper”, and a “Resurrection”) only to be killed (crucified) by one who lacks faith in him.  Unlike Christ, who sacrificed himself for others, Miss Lonelyhearts is killed for betraying another man. Other themes include castration (one which would become increasingly important with the Beat generation), the Great Depression, and the frustrated American Dream.

“He read it for the same reason an animal tears at a wounded foot: to hurt the pain.”

“He felt as though his heart were a bomb, a complicated bomb that would result in a simple explosion, wrecking the world without rocking it.”

“Art Is a Way Out. Do not let life overwhelm you. When the old paths are choked with the debris of failure, look for newer and fresher paths. Art is just such a path. Art is distilled from suffering.”

Miss Lonelyhearts is Book 1 completed for the Modern March event.

Miss Lonelyhearts is Book 11 completed for the Classics Club Challenge.

Miss Lonelyhearts is Book 134 completed for the 1,001 Books TBR Before You Die Challenge.

← Me and Jane Austen
Thoughts: A Room of One’s Own by Virginia Woolf →