Thoughts: Sodom on the Thames by Morris B. Kaplan 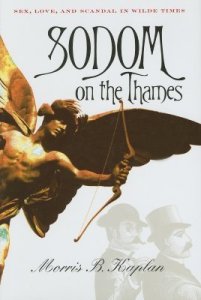 Sodom on the Thames is a descriptive and argumentative essay divided into four chapters, each of which focuses on one element of male same-sex love and/or sex in the late-Victorian period.

Part One, “Sex in the City,” deals with the infamous Boulton and Park case.  In it, the history of two men (Ernest Boulton and Frederick William Park) who were also crossdressers and likely prostitutes, known as Lady Stella Clinton (Boulton) and Fanny Winifred (Park), is given and their trial for intent to commit the act of sodomy is relayed.  Kaplan employs readings from court records, newspapers, personal correspondences (diaries, letters, etc.) and a famous pornographic novel written by John Saul to reconstruct the world of Boulton and Park, including the way male-male love and sexuality manifested itself.

Part Two, “Love Stories,” recounts the story of William Johnson Cory, a master at Eton College who had intimate relations with some of his students.  It also relays the story of those students’ relationships with each other (and other male and female lovers) as they aged and moved on from college (high school).  Kaplan again relies heavily on primary source documents, such as letters and diaries, to reconstruct their friendships and romantic and sexual relationships.  He also discusses linked fears and perceptions between the Boulton and Park case and the pederasty and effeminizing nature of all-boys schools (where boys were encouraged to play the role of women in plays, for instance).

Part Three, “West End Scandals,” and Part Four, “Wilde’s Time,” both deal with sexual and romantic scandals of the period, not all of which were homosexual in nature (many were about Irish divorce cases, for instance).  His primary investigation here is not just how homosexual acts were persecuted and prosecuted, but how class and wealth impacted one’s treatment by the law and by the press.  Kaplan makes the case that the aristocratic and powerful “criminals” were often given preferential treatment under the law, but the press at this time became more publically outspoken against such biased treatment and often pushed prosecution of offenders when the legal authorities might have otherwise turned a blind eye.  Such realities set the scene for Oscar Wilde’s trial and are likely why he was eventually convicted and sentenced to such severe punishment.

The introduction, epilogue, and conclusion are, like the intermediary chapters, very interesting and add much to Kaplan’s overall argument.  He discusses in these sections, for instance, the role that queer and feminist theories play on the construction of this work.  He also supports his decision to relay these histories in story form as a way to add depth and honesty to the discussion, elements which historical analysis or theoretical approaches might typically lack.  Kaplan is clearly passionate about the subject material –sometimes arguably to the point of bias- and anyone interested in sexuality and gender issues of the late-Victorian period will likely gain much from reading this book.  Though it is not in the strictest sense a historical synthesis (the lack of a works cited/bibliography speaks to this), Kaplan’s argument for adding storytelling narrative to historical analysis is well-taken and well-received.

One Comment on “Thoughts: Sodom on the Thames by Morris B. Kaplan”