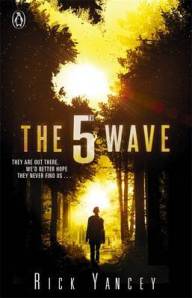 Plot/Story:
3 – Plot/Story is interesting and believable.

Rick Yancey’s The 5th Wave is a young adult sci-fi dystopian novel that has been carefully constructed to check off all the boxes of the new “classic” post-apocalyptic genre of YA fiction.  In it, we find the main character, Cassie, on a quest to save her younger brother after they have been separated from each other during the 4th Wave.  Cassie’s family, like so many other families, has been decimated, leaving her entirely alone.  As she navigates the dangerous and deserted middle United States, she encounters a young man named Evan who might turn out to be her personal savior, or her biggest nightmare.  In the meantime, her first crush – Ben Parish- has been taken to a secure military base, where children between the ages of 6 and 16 are being trained as soldier-warriors.  They are given the tools they need to identify the enemy and the skills they need to end them.  But, in the end, the question of “who is the enemy?” turns out to be much more complicated than anyone could have imagined and the answer brings Cassie and Ben racing toward each other and toward the same goal, though they don’t even know it.

To begin with, Yancey, like many other YA dystopian writers before him, makes a smart choice in centering his story on teenagers and children.  We all want to root for young heroes – we want to see them overcome their struggles and survive despite the lack of guidance and protection that comes with having lost their parents.  Yancey also cleverly introduces a muddled love interest – an intergalactic Romeo and Juliet scenario that should tug on everyone’s heart strings.  Except it, like many of the other relationships in the book, falls flat.  Cassie is totally in lust with Ben.  Evan is totally in lust with Cassie (okay, maybe in love, a little bit).  Ben doesn’t really know Cassie exists, but he conveniently helps to save her little brother, which brings them all together – the result?  Nothing.  450 pages of build-up on a sidelined teen romance that goes absolutely nowhere, except that we are to assume Evan disappears to make way for Ben (in a future sequel?).  On the other side, we have the villains who are essentially villains for villainy’s sake.  This is, in my opinion, the least satisfying type of “bad guy.”  Sure, the Silencers need bodies (apparently) and thus have a motive for their bad deeds but it is established by one of their own that the Silencers could have lived on Earth in peaceful coexistence with humans. They just didn’t want to do that – too confusing?  Ultimately, these formless, bodiless consciousnesses floated through space for thousands of years to get to Earth, where they could unite their minds with human bodies, except they don’t really want or like their human bodies.  Ultimately, it felt as if a bad guy was needed and alien villains haven’t been used on a grand scale in a while (considering all the zombie/vampire/supernatural stories lately), so it was a simple and “uniquely retro” solution.  In the end, the one-dimensional bad guys and the relatively depthless good guys (aside from a few interesting ones, like Sam and Evan whose points of view we only get once, sadly, and Ringer, who we see only as a secondary character) created rather shallow relationships and motivations.  Their stories lacked substance which kept me from caring too much about what happened next and, unlike Ender’s Game or The Hunger Games, does not leave me wondering about the sequel books.

Yancey certainly knows how to tell a story.  His use of language is great – engaging and effective.  Some of the choices he makes, though, such as the multiple points of view, do not seem to be entirely necessary or helpful.  Each chapter is from a different character’s perspective and, in some ways, this was required due to the fact that Cassie and Ben, the two protagonists, were in different locations and developing their two divergent stories, to be later united at the end; however, I think a third-person narration might have done more for the story.  Take, for instance, the lack of uniformity – all of the chapters were wildly different lengths so a moment might be spent with one character, and then dozens of chapters with another.  Also, some of the most poignant perspectives, such as that of Sam and Evan, were glimpsed only briefly, which was disappointing.  Ultimately, the narrative’s style – the ease and naturalness of the prose – is definitely strength, whereas the form and structure were not as well-crafted. The first portion of the narrative drags on for quite a while and the latter part flies by.  Uniformity and balance, plus some careful cutting and focus, could have tightened up the plot and allowed Yancey’s talents as a storyteller to shine a bit more brightly than it did.

The 5th Wave by Rick Yancey is perhaps one of the most hyped, most anticipated young adult books of 2013.  It is being described as Ender’s Game meets The Host and as The Hunger Games meets Close Encounters, among other combinations.  In keeping with the trend, I would add my own comparison:  The 5th Wave is Battle Royale meets Invasion of the Body Snatchers.  The problem with all of these comparisons, though, is that they spawn from a sense of the derivative.   While the story and some of its cast were interesting, what the narrative lacked was a true sense of purpose and meaning.  There might be multiple messages, here – don’t always do what you’re told just because someone in a position of authority says so.  Things are not always what they appear to be.  Only the strong survive.  Luck matters.  These are all great, simple additives for stories, but they don’t hold up too well as major themes.  Aliens invade, almost everyone dies, but a few fight back – this might work well in the movies, particularly if a romantic or emotional subplot is infused into the action, but a good book needs more than goodness for goodness sake.

Is The 5th Wave a good read?  Absolutely.  It is actually the epitome of a great summer read – filled with action, suspense, aliens, and friendships formed in the face of great adversity.  But is The 5TH Wave “the Young Adult book of the year,” as some have claimed?  No, I think not.  I would much sooner give that title to Andrew Smith’s Winger.  Still, if you’re a fan of this genre, if you enjoyed The Hunger Games, Divergent, and the like, then the odds are you will like this one, too.  It might not be the most profound book in the world, but it is an entertaining read – not a bad way to spend a summer afternoon.

“And it occurs to me that there’s no real difference between us, the living and the dead; it’s just a matter of tense: past-dead and future-dead” (113).

“The fire in my chest grows white-hot, spreads over every inch of my body. It melts my bones; it incinerates my skin; I am the sun gone supernova” (263).

“When the moment comes to stop running from your past, to turn around and face the thing you thought you could not face – the moment when your life teeters between giving up and getting up – when that moment comes, and it always comes, if you can’t get up and you can’t give up either, here’s what you do: Crawl” (419).

“It’s the strong who remain, the bent but unbroken, like the iron rods that used to give this concrete its strength.  Floods, fires, earthquakes disease, starvation, betrayal, isolation, murder. What doesn’t kill us sharpens us. Hardens us. Schools us” (446).

“It’s almost dawn. You can feel it coming. The world holds its breath, because there’s really no guarantee that the sun will rise. That there was a yesterday doesn’t mean there will be a tomorrow” (456).

9 Comments on “Review: The 5th Wave by Rick Yancey”