Thoughts: To Kill a Mockingbird by Harper Lee 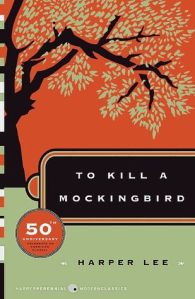 Harper Lee’s noted –and only- work, To Kill a Mockingbird, has become a classic piece of literature and a staple of American culture and southern history.  The narrator and protagonist, Scout Finch, along with her brother, Jem, and their friend, Dill, begin the story as lighthearted, inquisitive and playful children who are fascinated by a mysterious neighbor named Arthur “Boo” Radley.  As the story progresses, they have a series of encounters with Boo, but they do not know it (until all comes to a head in the tragic and life-altering conclusion).  Jem and Scout’s father, Atticus, is the town (and county’s) best lawyer, and also a representative to the state legislature.  He is tasked with defending a black man against the charge of rape, and the task will change his children forever.

Although the book directly wrestles with issues of racism, violence, bigotry, caste, and education, its primary concern is coming of age and loss of innocence.  Scout’s innocence, in particular, but also Jem and Dill’s, is threatened by successive incidents that reveal to these generally kind, somewhat simple kids the presence and nature of human evils.  This is especially made clear with the conviction of Tom Robinson, a black man who, from the start, was bound to be found guilty, despite Atticus Finch’s brilliant defense and the clear evidence support Robinson’s innocence.  This conviction shatters Jem’s world and forces him into manhood, meanwhile causing Dill, a gentle and artistic soul, to face the harsh realities of a world he tries so hard to avoid.

The trial is only the first of two major incidents which will change the kids’ worlds.  The second happens at the end of the book, when the man whom accused Robinson of rape (and whom Atticus clearly implicates instead), attempts to make good on his promise to ruin Atticus Finch.  Although neither he nor anyone in his family was punished for their perjury and false accusations, and although Robinson was ultimately convicted and suffered the harshest fate, Bob Ewell still feels it necessary to seek his own justice for the “damage of character” done to him at the trial.  This particularly subplot is particularly telling of how class, within white society, is just as important and just as divided as the world of blacks and whites.

Ultimately, To Kill a Mockingbird is an exploration of human nature and each individual’s capacity for both good and evil.  It is a commentary on the importance of moral education – much more so than academic education, and a discussion on social class and the true meaning of justice (and who is entitled to it).  Harper Lee utilizes interesting Gothic techniques, reminiscent of the great southern Gothics such as Flannery O’Connor, to build tension and anticipation, and to foreshadow the story’s more important events.

Allowing the story to be told from Scout’s point of view, in retrospect, adds both honesty and evidence to the story, but also some room for doubt.  She narrates the entire story in the first person, as through her childhood self’s eyes, but then adds analysis and supplementary thoughts to the narration, as an experienced adult revisiting these events after many years.  The inclusion of these comments makes the narrator more trustworthy, as it reveals to us that she is aware (and admitting) that she is somewhat distanced from the time and place of the story and, therefore, could possibly be over or under-exaggerating certain things.  The tone of her narration, like the tone of the story, begins in childhood innocence but becomes increasingly foreboding and self-conscious as the tale unwinds.

To be sure, To Kill a Mockingbird holds a beloved place in the hearts of many readers and also a coveted spot in the canon as a “classic” of American literature.  When I first read this book, many years ago, I was not as much of a fan as I thought I would be, but this re-read has proved me wrong.  The book is well-written and masterfully constructed (where and how Lee begins the story, for instance, really struck me as perfection, this time around).  The characters, good, bad, and indifferent, are believable, interesting, and important to the plot and scenery.  This is a book I will be revisiting again and again.

I read this book as part of a read-along, with additional thoughts posted Here.

“Thus we came to know Dill as a pocket Merlin, whose head teemed with eccentric plans, strange longings, and quaint fancies” (9).

“There were other ways of making people into ghosts” (12).

“When a child asks you something, answer him, for goodness’ sake. But don’t make a production of it. Children are children, but they can spot an evasion quicker than adults” (99).

“Shoot all the bluejays you want, if you can hit ‘em, but remember it’s a sin to kill a mockingbird” (103).

“Before I can live with other folks I’ve got to live with myself. The one thing that just doesn’t abide by majority rule is a person’s conscience” (120).

“I wanted you to see what real courage is, instead of getting the idea that courage is a man with a gun in his hand. It’s when you know you’re licked before you begin but you begin anyway and you see it through no matter what” 128).

“Dill was off again. Beautiful things floated around in his dreamy head. He could read two books to my one, but he preferred the magic of his own inventions” (163).

“Atticus had used every tool available to free men to save Tom Robinson, but in the secret court of men’s hearts Atticus had no case” (276).

“I came to the conclusion that people were just peculiar. I withdrew from them, and never thought about them until I was forced to” (279).

“As I made my way home, I thought Jem and I would get grown but there wasn’t much else left for us to learn, except possibly algebra” (321).

18 Comments on “Thoughts: To Kill a Mockingbird by Harper Lee”