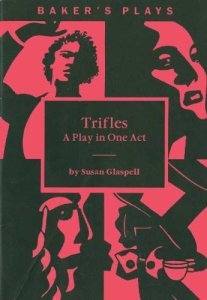 Susan Glaspell’s Trifles (1916) is a one-act play that would ultimately inspire another of her works, a short story called “A Jury of Her Peers.” The story is loosely based on an actual event, the murder of John Hossack, which Glaspell reported on while working as a journalist in Des Moines, Iowa. Hossack’s wife was accused of killing her husband, but the wife denied it. Although she was convicted, that conviction was eventually appealed and overturned.

Glaspell is an essential early feminist writer, one who was directly influenced by the likes of Kate Chopin and Fanny Fern; alas, she is often overlooked in feminist literary studies. For those unfamiliar with Glaspell, this short one-act play (my copy was only 26 pages) is a great place to start. The play is funny but poignant. It is a brief, direct example of Glaspell’s primary concerns – the inequalities between women and men, and the culture’s preoccupation with gender roles (stereotypes). It is ultimately a harsh exposé on the patriarchy’s oppressive control over women’s lives.

As its title suggests, the “trifles” of this play are “women concerns,” which men look at as relatively nothing in comparison to “real” (that is male) problems. Glaspell’s approach, however, which sets-up two distinct narrative points of view, one female and one male, creates an interesting and often comic tension between the main characters – the men and their wives. The house which serves as the play’s setting functions as both a crime scene but also as a home, and the characters, depending on their sex and their “purpose” or “role,” will view the house as one or the other of these things (the men treat it as merely a crime scene, the women cannot detach the house from its function as the home of their friend and neighbor who has been accused of murder).

What is most interesting about this play is how much of a wallop it really packs. It is deceptively simple, not just because it is short, but the language, scenery, dialogue, stage direction – everything about the play is designed to be easy. Everything, that is, except for its subject matter. A reader (or audience member) could easily lose herself in the comedy of the situation, in the banter between husbands and wives, or in the knowing looks passed between the ladies, but the reality of the play, the feminist charges being raised and the dark, despondent yet somehow liberating mood created by the plight of the play’s absent Mrs. Wright (pun intended?) creates a rich paradox impossible to ignore.

The final moral crisis, which the women must face together and alone, reveals much about the meaning of justice and the role of women in seeking or fulfilling that justice. Although it is the men who “own” the law (quite literally, as the two male characters represent the police force and the county law offices), it is the women who will determine Mrs. Wright’s fate.

“I didn’t know as what his wife wanted made much difference to John.”

“Women are used to worrying over trifles.”

“She used to wear pretty clothes and be lively, when she was Minnie Foster, one of the town girls singing in the choir. But that–oh, that was thirty years ago.”

“I know how things can be–for women. I tell you, it’s queer . . . we live close together and we live far apart. We all go through the same things–it’s all just a different kind of the same thing.”