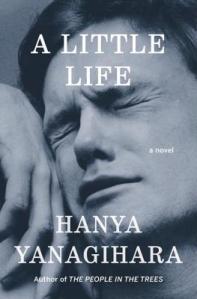 A Little Life by Hanya Yanagihara

This is the first formal review I’ve written for Roof Beam Reader in five months, when I reviewed Emily St. John Mandel’s Station Eleven in February. As with that book, I find, this time, that I’m unable to move onto other reading until my thoughts and reactions about this one are evacuated. It’s just one of those books. This post is bound to be lengthy, so I apologize in advance for that. But, as I set out to write my thoughts on this peculiar and devastating book, I find that I must clarify my position on two points that have significantly influenced my reaction to the novel.

First: the book has been heralded as the long-awaited “great gay novel.” This description is not only maddeningly inaccurate, it is dangerously wrong. Despite appearances, this is not a novel about gay life, about homosexuality or coming out; it is not about sexuality or sexual identity at all. This is a book about friendship and love battling to save the life of someone who is haunted by memories of pedophilia and rape, sexual and physical abuse, psychosis, emotional trauma and sadism, and who cannot escape except through self-criticism and self-harm.

While any of these terrible things could be relevant to gay life, they are also relevant to straight life. The problem is: calling this book the “great gay novel” and then expecting readers to equate homosexuality, gay identity, with child sexual abuse and pedophilia as some kind of post hoc ergo propter hoc relationship is what gay rights activists have been fighting against for so very long. Jude St. Francis does not end up in a gay relationship because he was abused, as a child and an adult, by men. Jude St. Francis is not even gay: he is sexless; no, he is de-sexed.

The comparison that these reviewers make are perhaps unconscious, but they are all the more dangerous for that (worse: a part of me wonders if this push is due to cultural realities: it’s “time” for the great gay novel, so this must be it). I prefer the description given on the book’s own inside-flap: “An epic about love and friendship in the twenty-first century that goes into some of the darkest places fiction has ever traveled and yet somehow improbably breaks through into the light.” Yes, that’s it, for the most part. Let’s hope later editions remain true to this description and not the disturbingly misleading ones that outside forces have attempted to place on it.

That being said, in an academic sense, calling this book a “great queer novel” makes a lot of sense. The difficulty is helping people understand the difference between a “gay” novel and a “queer” one. The book is wildly anti-heteronormative. There are some straight people in the book, major and minor, but the majority of the main characters are somehow “othered,” as are their histories and relationships. For example, one character is adopted as an adult, another is parentless; one character is bisexual, another is gay but struggles with it; one character is disabled, another seems able to change his body almost at will.

Gender and sexuality in this book are uncomplicatedly fluid: transgender issues come up, for instance, as does lesbianism and the cis-gendered. In this way, yes, call it a great queer novel. Call it a study of male friendship that refuses to be categorized. But do not call it the great gay novel, as the relationship at the heart of the story has nothing to do with sexuality: the main character is basically asexual and his eventual lover is basically heterosexual even though he ends up with another biological male. Most importantly, their love, their partnership, has far less to do with sexual identity than it does with non-sexual romantic friendship.

This is all my reaction to others’ descriptions of the book, however. There’s nothing the author or publisher have said (that I know of) which reflects such a flawed perspective on the story, and the story itself doesn’t presume to present itself that way, either.

Second: My personal experience reading this book might be far different from most, and that is because I intimately understand and relate to it. Because of the nature of this book, of Jude St. Francis’s life, and Willem’s, I can’t say any more than this. Suffice it to say, it is a deep struggle for me to separate myself from this story in order to review it objectively as a work of art. But I’m going to do my best.

Thoughts on the Book:

Essentially, this is a book about friendship. The characters are the heart and soul of this novel, especially the main character, Jude, who, despite his tragic past, is the core of the four friends’ lives. They (Jude, Willem, JB, and Malcolm) met as college freshman, although Jude was only 16 at the time. Each of the characters is special in some way: Willem the actor; JB the artist; Malcolm the architect; Jude the lawyer. They all struggle, at first, but each will eventually reach wild levels of success. One can imagine that they were able to achieve their successes only because of their friendship, although this is never specifically granted by the novel itself.

Outside their friendship are other characters, major and minor, some of whom arrive and remain (Jude’s adoptive parents, for instance, and his doctor) and others that serve a purpose and then disappear. There are not many women in the story, which has been a point of contention for some, but Yanagihara has already explained her reasoning for this (it’s a story about male friendship and the many varied ways that friendship can manifest itself) and I take no issue with the lack.

An interesting and admirable element, in my opinion, is the narrative voice which is at times third-person with varied relativity to one or another of the characters depending on whose story is being told at the time, and sometimes, much less frequently, in the first-person, as when a character is relaying things directly (usually in a kind of monologue, which I imagined as dictation or epistolary in nature, but could just as well be a character speaking aloud to himself). This narrative approach allows for two things: first, the mysterious, slow, painful revelation of Jude’s backstory; we the reader know as much about Jude as the other characters do, and only bits and pieces (first, hints; then, allusions; next, minor descriptions; finally, all of it) come through, in guesses made by other characters or in sections when the narrator is closely aligned with Jude himself. This can be vexingly frustrating, but it is also brilliant in its devotion to an honest portrayal of the main character. Second, it allows the reader to get closer to Jude in the same way that the characters do, to understand how this dynamic works, fails, strains, etc.

Less interesting, less creative, is the prose style. It’s surprisingly matter of fact. I haven’t read Yanagihara before, so I’m not sure what her writing style is in general, but I will say that I think it works well, here. Even though the prose and language aren’t particularly appealing, the pages still turn. There’s a balance, here, equal to the balance between the plot and narration. The raw, almost clinical style of writing is like the raw, almost clinical way that Jude lives his life. In moments of tension, the prose style will change subtly. In moments of affection, breakthrough, break down: the same. The reader gets to know Jude, as much as is possible, and begins to realize that Jude must make great effort, 24 hours a day, 7 days a week, to be the person he is: he is always, always inside his own head. Every thought has some level of darkness and pain attached to it; every action is planned, agonized over, debated.

This has been one of the most intellectually and emotionally challenging reads for me. The complexity of the novel’s themes is matched by the intricacy of the narrative, the cerebral construction of story edifice and story time that allows the present and the past to unravel, slowly but significantly, so that, at a certain point about 400-pages into the book, I suddenly felt like I was just a part of this group. For me, it was like the flip of a switch.

At the half-way mark, I hated this book. I wanted to give it up.  It is painful, horrifying, depressing, and almost gratuitous. It is without hope, without joy. It is, as many have said, a type of exaggerated fantastic allegory, where the evils laid upon man are as persistent, unrelenting, scarring as can possibly be, and the goodness of friendship and true love are as pure, unwavering, angelic as can possibly be. It is a fairy tale where the only happy ending for Prince Charming is the ending every fairy tale necessarily leaves out.

There’s very little that is pleasant about this book: it is not a beautiful story and it will not be a beautiful read. I can’t recommend this book. But I can’t deny its power, either.

← Tiny Thoughts on a Bunch of Books
Thoughts: Go Set a Watchman by Harper Lee →

11 Comments on “Thoughts: A Little Life by Hanya Yanagihara”