Goodbye to Austen in August!

I’m not quite sure how this has happened, but the last day of August has arrived which means Austen In August 2015 is at its end. Oh, dear!

As we move onward from this annual event, I offer a few reflections: 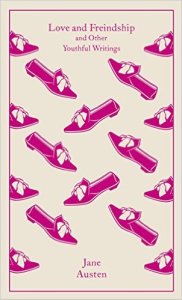 All that being said, I am also pleased to have finished one book for the event this year, which is the Penguin Classics Clothbound edition of Jane Austen’s Love & Freindship and Other Youthful Writings.  I’ve now read all of Jane Austen’s published works, including juvenilia and unfinished pieces, at least once (most of them more than that).

Reading the juvenilia was so much fun. It was fascinating to see the young Austen flexing her muscles, as it were, and playing with the styles and conventions of her day. It is clear to see how she developed her craft. What I think I most enjoyed about the experience, though, was getting to know Jane Austen a bit more. Her brilliance truly shines through her writing, but her youthful writing also offers generous glimpses at her personality.  Having read Austen in the way that I did (first the completed novels, then the unfinished stories, then the juvenilia–so, backwards, as it were), I find I can appreciate in a unique way her skill, her practice, and her profound wit and intelligence.

Of the juvenilia, I do have a few favorites.  First, I think, is “Henry and Eliza,” which I found to be incredibly funny.  Another is “The Three Sisters,” which is an early attempt at a novel and in which, I think, we see the very early manifestations of certain iconic Austen characters, such as Mrs. Bennet, Emma, and Mr. Darcy.

“Love and Freindship,” of course, is the titular story for a reason; it is humorous, insightful, witty, and characteristic of the author who would be Austen. Another point of interest for me in this story, as well as in a few other of these early works, are hints at homosexuality. Jane Austen was much more daring than many readers give her credit for, even in her later, finished works, where she discusses a number of important themes in subtle ways. She’s more audacious and overt in these youthful writings, though, which is a pleasure because it allows us to see how knowledgeable and socially aware she really was, and how adept she became at revealing just as much as she wanted to — a craft developed through genuine talent and practice. Austen, such a lady, even includes a number of murders in these early tales! 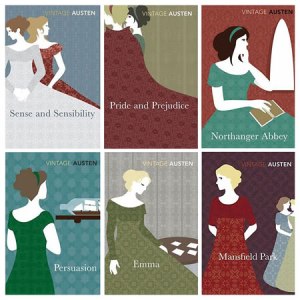 Two other sections I really enjoyed were “The History of England,” which is an absolute riot. Young Austen responds to some of the critical histories of her time that claim to be unbiased (Oliver Goldsmith’s The History of England for example) with a work saturated by overt opinion representing itself as pure fact. She employs characterizations of her own family, with the help of images drawn by her sister Cassandra, which adds personal intrigue and humor to the story as well, and she lambastes Queen Elizabeth I at every opportunity (with sincerity? in jest?). It’s one of the funniest and charming stories in the whole collection. In addition, the section of letters, which seem to be simply practice for creative/fictional epistolary writing, are a joy to read.

I had my doubts about reading Austen’s juvenilia, not because I thought it would be boring or without merit, but because I wondered what it could possibly add to my understanding of Austen as an author, which is best understood by reading and interpreting her finished works. The reality is, though, because Austen was always a writer, one organized her work in volumes, even the early attempts and scraps, reading these pieces adds an extraordinary amount of depth and richness to the entire experience. I could see a lot of the later novels’ themes and characters beginning to develop in these early attempts. I think it will be great fun to re-read (again) the big six works and consider all the practice Austen had put into her craft originally.

Now that Austen has concluded, I’ve decided to approach the future with much more general abandon, meaning I don’t want to plan too much of my reading. I’m still participating in The Classics Club, so I do have a “list” for that, and I’m also writing a dissertation, so I have plenty of works that I must read as part of my research. Other than these projects, however, I have little intention of participating in any other events or challenges for the foreseeable future, with one exception: RIP X!

For those who don’t know, RIP stands for R.eaders I.mbibing P.eril. It’s an annual event that takes place in September and October of each year. The goal is to read books/stories or watch movies that fit into the categories of horror, thriller, suspense, gothic, mystery, etc.  This is its tenth year, but my first time participating.  I’m getting married on Halloween this year (it is our favorite holiday), so I thought — well, all the stars and such are aligning! Why not?

There are a variety of challenge levels and goals and such, but I’ll keep my plans pretty simple: read at least two books in the horror/suspense genre. If all goes well, I might add a third, so I’ll list that as an alternate.

Book One: Horace Walpole’s The Castle of Otranto (1764). This is essentially the godfather of the gothic genre. It is very short and I’ve been meaning to read it for years. It’s also an entry on my Classics Club list, so I’ll knock out a two-fer if I finish it.

Book Two: Stephen King’s The Drawing of the Three (1987). I read the first in this series a few years ago and really enjoyed it. I’ve been meaning to continue on with the Dark Tower books ever since, but things get in the way. This will be a great way to get back into it.

Alternate: We Have Always Lived in the Castle (1962) by Shirley Jackson.  I love Shirley Jackson – her short story, “The Lottery,” is one of the best ever written, in my opinion, and I also absolutely loved The Haunting of Hill House. I can’t wait to read more from her, so hopefully there will be enough time for me to get to this one as well (I do plan on it, actually, but I don’t want to set the bar too high with so much else happening right now).

So, that’s it! The end to one extraordinary event and the commencement of another. I hope you all had a great time with Austen in August this year, and if you plan on participating in RIP X, let me know! I’d love to hear your thoughts and reading/viewing plans.