#30Authors is an event started by The Book Wheel that connects readers, bloggers, and authors. In it, 30 authors review their favorite recent reads on 30 blogs in 30 days. It takes place annually during the month of September and has been met with incredible support from and success in the literary community. It has also been turned into an anthology, which is currently available on Amazon and all author proceeds go to charity. Previous #30Authors contributors include Celeste Ng, Cynthia Bond, Brian Panowich, and M.O. Walsh. 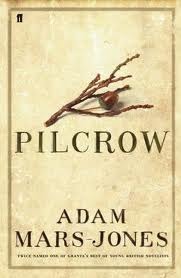 Adam Mars-Jones’s Pilcrow (Faber and Faber, 2008), a novel about a young English gay boy growing up in the 50’s and 60’s within various slipshod medical institutions, belongs to that rare list of literary works intent on reconstructing and honoring childhood experience. “I wanted to know the proper outside words for things,” narrator John Cromer tells us early in the book. The phrase is the perfect embodiment of psychosexual development à la theorists like Julia Kristeva, signifying a world in which coming of age means entering the clinical world of men, where language is stripped to utilitarian purposes.

Cromer resists the outside world as much as possible even as he is fascinated by it, living within the fantasies and interiority of childhood, illness at times providing a metaphorical and literal cocoon (the Tan-Sad, a complex stroller built for older disabled children, shielding him from the world while also allowing him to explore more of it), though as the narrative progresses and puberty hits, Cromer becomes more and more fascinated by the world of men. And it is exactly within the linguistic border between John’s interior and exterior world that Mars-Jones has crafted a truly unique narrative voice.

In an equally hilarious and tragic scene at the end of the novel, Cromer seeks solace from a mentor who informs him that disabled individuals were once considered sacred by “primitive” societies. True, in a way, the adult narrator cheekily tells us, if you omit the fact that these individuals were prized because of their prime value as human sacrifices. Mars-Jones cues the other shoe to drop almost immediately following one of Cromer’s wishes. Cromer’s desire for human touch leads to a terrifying confrontation in a pool. His sexual curiosity leads to exploitation. Growing up always involves these exchanges, and only after the process is complete can we see just how much tectonic world shifting has occurred—though, as this novel’s nuanced attention to detail reminds its reader, most of us lack the courage to do the math.

Pilcrow belongs to a rich tradition of queer literature dealing with illness and childhood identity, though it is unique in its virtually complete omission of shame. Cromer may be a victim at times, but by the end of the novel he reshapes and repurposes his experiences to fit into a rich interior life that leaves no room for self-loathing.

What better symbol for this than the pilcrow?

Garrard (pronounced without the final ‘r;’ a family oddity) Conley is the author of the memoir, Boy Erased, out from Riverhead (Penguin) May 2016.

His work can be found in TIME, VICE, CNN, Buzzfeed Books, Virginia Quarterly Review, and many others. He has received scholarships from the Bread Loaf, Sewanee, and Elizabeth Kostova Foundation Writers’ Conferences and has facilitated craft classes for Catapult, Grub Street, Sackett Street Writers Workshop, and the Fine Arts Works Center in Provincetown. If you are interested in contacting him, you can find information here.

After growing up in a small Arkansan farming community, heading to a liberal arts college a few hours away, completing service for Peace Corps Ukraine, and attaining a Master’s degree in creative writing and queer theory, Garrard taught literature in Sofia, Bulgaria at The American College of Sofia. He now lives in Brooklyn and teaches in NYC.

He has way too many coffee cups and never enough coffee.

Many thanks to Garrard for taking time out of his busy schedule to share with us this great review of another author’s work! Fans of Garrard Conley or Adam Mars-Jones, or those newly interested, might also want to join us here in just a few days as we kick off THE LITERARY OTHERS, a month-long event celebrating LGBT History and Literature.