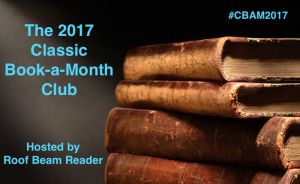 As July comes to an end, it’s time to look toward August and our next read! This month, we’ll be reading Northanger Abbey by Jane Austen! I’ve chosen this one to coincide with my annual Austen in August event, which also begins on August 1st.

Northanger Abbey is often referred to as Jane Austen’s Gothic parody. Decrepit castles, locked rooms, mysterious chests, cryptic notes, and tyrannical fathers give the story an uncanny air, but one with a decidedly satirical twist.

The story’s heroine is Catherine Morland, an innocent seventeen-year-old woman from a country parsonage. While spending a few weeks in Bath with a family friend, Catherine meets and falls in love with Henry Tilney, who invites her to visit his family estate, Northanger Abbey.

Once there, Catherine, a great reader of Gothic thrillers, lets the shadowy atmosphere of the old mansion fill her mind with terrible suspicions. What is the mystery surrounding the death of Henry’s mother? Is the family concealing a terrible secret within the elegant rooms of the Abbey? Can she trust Henry, or is he part of an evil conspiracy? Catherine finds dreadful portents in the most prosaic events, until Henry persuades her to see the peril in confusing life with art.

Feel free to read at your own pace, post at your own pace (or not at all), and drop by to comment/chat about the book at any point. The schedule above is just the one I plan to use in order to keep myself organized and to provide some standard points and places for anyone who is reading along to get together and chat.

*Further description and analysis can be found at SparkNotes.

← In the Path of Falling Objects by Andrew Smith
Austen In August Year 5! #AustenInAugustRBR →