Every Day by David Levithan

Can you imagine yourself not as a physical being, but as an ethereal entity – a formless consciousness that floats through life from day-to-day, always looking like someone different but always knowing yourself to be the same?

Every day since birth, A wakes up in a different body. Sometimes he wakes up as a boy, sometimes she wakes up as a girl. A has no physical or biological sex, instead needing to adapt to the sex of the host body where s/he resides any particular day. S/he is capable of accessing the memories of the host bodies and can also allow (or not) that host to remember what A experiences on the day of his visit, though s/he usually chooses to block these memories so that the host will not feel as if they have been possessed or invaded. Each night, when A falls asleep in one body, s/he knows that s/he will wake up in the morning as someone entirely different.

A does have a personality, consciousness, and sense of self that is entirely individual, though s/he has no physical form, and A carries this individuality into each new day and every new body. This is the story of 40 days in the life of A – perhaps the most important 40 days that s/he will ever experience. S/he learns that s/he is perhaps not alone in this very unique experience – there may be others out there who are doomed (or blessed?) to exist only in others’ bodies. A also falls in love, for the second time, and must learn how to make a relationship work under such extraordinary circumstances or s/he must choose to make the ultimate sacrifice, for someone else’s happiness.

The two main characters are A and Rhiannon, 16 year olds who are on their own paths to self-discovery and whose encounter with each other will set the trajectories of their lives in new directions. Through A, we also witness, on the surface, the lives of dozens of other teenagers: boys and girls; popular kids and nerds; athletic kids and beautiful ones; kids who are blind, fat, depressed, alcoholic, addicts, or suffering from ADHD. We also get glimpses of their families and friends, though their stories are always in the background as A navigates their lives for one day, in pursuit of his own. The only other recurring characters include two of A’s former hosts, Justin (Rhiannon’s boyfriend and the way A comes to meet her – awkward!) and Nathan, whom A has left, perhaps purposely, with lingering feelings of his “possession” and who ultimately introduces him to Reverend Poole, the man who will change A’s perspective forever. Levithan’s primary characters are interesting individuals, as are the host bodies, all of whom are believable teenagers with varied personalities and circumstances. Viewing the characters through A, who essentially is each of them (including Rhiannon) at one point or another, creates a unique experience for the reader.

The structure of the book, too, is interesting, though not entirely unique. It is, in a way, a journal-format. Each small chapter is one day in the life of A and, indeed, the chapter titles correspond to the chronological day (such as Day 6014) in A’s life. This structure, while not entirely original, is absolutely appropriate for the type of story being told and is suitable to A’s narrative style. Levithan’s writing style, too, his prose and language, are appropriate to the age and maturity level of the narrator and also match the oftentimes didactic nature of the story. It is lofty but grounded, well-paced but reflective.

One criticism of the book is that it is at times preachy. This point is well-taken and I do agree with those who find certain elements, such as the narrative arguments for social and sexual equality, not just pointed, but sometimes heavy-handed. Levithan is an issue writer, though, and as another reviewer has aptly mentioned, issue writers are interested in making their point and, in fact, making points is necessary to their purpose. The fact that I agreed with most of the points Levithan was making (gender equality, love of the person not of the sex, etc.), made the story more interesting for me, but I can certainly see how readers who struggle or disagree with such sentiments might find the “lecture” portions of the narrative a bit jarring.

My primary point of contention comes from a particularly disturbing element of the story, which is, I believe, both indicative of the narrator’s personality but also, though I am usually reluctant to make these arguments, of the writer’s bias. Throughout the book, the narrator makes a point of being highly understanding and empathetic. Since s/he has spent his (I will stick with gendered-male pronoun from here on out, as that is ultimately how I perceived the narrator) life living inside of different bodies, it is understandable that he would be a more enlightened individual. He has been male and female, blind, deformed, ugly, and everything in-between. In each case, he makes the argument for empathy and compassion – that we should love ourselves and each other as we are and that each of us suffers from our own demons which might affect the way we treat ourselves and the way we interact with the world. A is able to build his relationship with Rhiannon, another equally enlightened young woman, whether he be in the body of a beautiful black girl, a beefy metal head, or a stringy track jock. The point is well-taken: be yourself, try to show others what is on the inside, and learn to accept others for who they truly are, not just for what they look like. 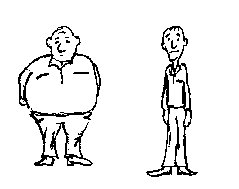 But then we get near the end of the book and A wakes up in the body of an obese boy. The body weighs 300 pounds and suddenly the tone changes dramatically, for the worse. This chapter, and the next one, is devoted largely not to acceptance or understanding, but to feelings of disgust and anger. It is this body, and only this one, that A is ashamed to show Rhiannon. It is this body that A blames for what it is. Unlike the addicts or depressed teenagers, whom A tries to empathize with and thereby get the reader to think more deeply about, this fat kid gets nothing but criticism – A even tries to “access” the reasons why he might be so fat, but finds only laziness as the cause. Then, after deciding to meet with Rhiannon anyway, it is after this particular meeting that Rhiannon concludes she can no longer engage in this kind of relationship, because she cannot build a relationship with someone who never looks the same. Rhiannon struggles with this all along, but with all of the other bodies, male and female, tall and short, pimpled, hairy, or beautiful, Rhiannon accepts the body. Until the fat, sweaty boy shows up and everything changes. It would be easy to say that this is just a teenage insecurity – that the author is trying to make a statement about the judgmental nature of people and youths; however, throughout the book, both A and Rhiannon, as I have already mentioned, are incredibly enlightened and accepting of all people and situations. Why, then, is this one person so different – so disgusting? Unfortunately, I feel it is a deeper bias coming from the author. He makes a point of making points in this book, as in all of his books. It would be naïve and unfair to think, then, that this, too, is anything other than his making a point: do not be fat. Fat comes from being lazy. There are no psychological or emotional reasons for obesity, it just means you eat too much and do too little. It is outrageous. Not since reading Atlas Shrugged have I been so angered by a particular element of a particular book and it saddens me that this perspective comes from Levithan who is, otherwise, a very positive, compassionate writer.

Ultimately, though, I did love this book. I found the premise incredibly interesting and thought the social/gender politics were expressed in a unique way. The story moves at a great pace, the characters and their stories are fascinating and believable. There is a fantasy element to the story which comes into play late in the book, when Reverend Poole and A finally meet, but the narrative is still grounded firmly in reality. Had it not been for the one bizarrely glaring prejudice mentioned in the paragraph above, I could have easily found this to be a perfect read. As it is, I found it, still, to be a wonderful one. Highly recommended.

“You shouldn’t have to venture deep down in order to get to love” (72).

2 Comments on “Every Day by David Levithan”