The Marbled Swarm by Dennis Cooper 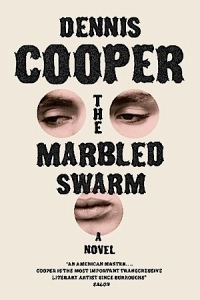 Harper Perennial calls The Marbled Swarm, Dennis Cooper’s “most haunting work to date,” and it is impossible to disagree. Although this latest from Cooper is more psychological and subtle, in many aspects, than most of his other works, it is perhaps because of those reasons that it is even more effective. The book is disturbing, as is typical from Cooper. The narrator, a deeply troubled young man with fantasies of incest on the brain, is consumed by homicidal and cannibalistic tendencies. The layers of his mind are just as twisted, concealed, and misleading as the secret passageways and hidden rooms that encompass his father’s voyeuristic mansion. The book, at its core, is a mystery story, which parallels the physical reality with the narrator’s subconscious, and what the reader finds in both places is darkly troubling.

A narrator who refuses to identify as gay, but whose sexual perversions include raping and killing boys (particularly of the “Emo” type), then eating them; a father who spies on his sons, and who slowly and subtly persuades them to become sexually infatuated with each other; a boy who lies about being raped by his father to his brother, and by his brother to his father, with the hope that one of them will rape him; men who kidnap boys, alter them through plastic and bone surgery so they will look like their fantasy type, then sell them for sexual favors to men with twisted desires. These are just some of the characters in The Marbled Swarm. Individually, each is sick, twisted, and alarming in his own right; together, they create a world of psychological distrubia. The narrator and main character is the most interesting of the bunch, perhaps because the reader witnesses some of his secrets unfold chapter-by-chapter. His younger brother and father are also fascinating, in a “this car crash makes me want to vomit but I can’t turn my head” kind of way. Ultimately, the group serves to progress the story’s purpose, which is a commentary on language and communication, as well as Cooper’s modus operandi – exposing the terrible side of humanity and the evil side of desire.

Cooper’s writing style is nearly unmatched; he is a type of writer that has been unknown in American Literature since William Burroughs. Although his themes are twisted and hard to stomach for most, his ability as a writer are laudable to say the least. His mastery of language, his ability to advance a plot seamlessly, and the sickeningly playful way he messes with his readers minds are impossible to overlook, despite how unsavory the subject matter. In The Marbled Swarm, Cooper has accomplished all that his previous works attempted, which is saying much, because his previous works were groundbreaking in their own right. In retrospect, though, it is clear to see that Cooper has been developing over time, getting better and better; and this latest, his masterpiece, is proof of how hard he has been working to perfect his craft.

After admiring Cooper’s work for nearly a decade, I can say that, though I have loved and been fascinated by almost every book, poem, and essay the man has ever written, this is the book all previous works were helping to develop. It is, by far, Cooper’s most complex piece to date, and also his finest in craft, in theory, and in delivery. The fluid prose, disturbing subject matter, and psychological warfare (within the story and between narrator and reader) make this book a demonstrable work of genius. Had this been just a story about a disturbed young man who had sexual attractions for his brother and father, and who liked to eat human flesh, the book would have been sick, sad, and confusing; however, though that is technically what happens in the book, it is not what the book is about. This is a story about desire and depression; it is a story about cravings and theatrics;  it is a story about the pleasure of playing “the witness” in horrifying situations and, most importantly, it is a story about story-telling.