Lincoln, Socrates, and A Funeral

In this third “potpour-reads” post, I share some quick thoughts on three recent reads, all of which were completed in June. Somehow, none of these books are ones from any of my challenge lists. Go figure. I read Lincoln in the Bardo because it is getting a lot of attention and because it sounded interesting. I read Socrates Café because I have been pivoting toward philosophy and history pretty heavily in the last couple of months (since January, really, when I began my focused study of Stoicism); and I read I Felt a Funeral, In My Brain largely based on the recommendation of the incomparable Andrew Smith, who has not steered me wrong, yet.

Lincoln in the Bardo by George Saunders 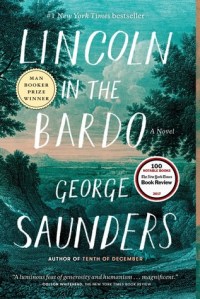 George Saunders’s Lincoln in the Bardo is unlike anything I have ever read. It is a contemporary postmodernism married with black humor and historical fiction. As a first novel, it seems a stunning achievement, though this is the first Saunders work I have read at all, so I do not know how it compares to his short stories. (I’ve had Tenth of December sitting on my shelf for years, having purchased it only a few weeks after it was published; it is safe to say I plan to get to it sooner rather than later, now.) Essentially, Saunders combines historical accounts of Lincoln’s life and presidency with fictional ones that he creates, and then interweaves in almost testimonial fashion between the narrative portion, which is told by a trio of bizarre ghosts who meet one of Lincoln’s sons and, through him, the President himself. I’ve read a number of reviews that found the humor in this book to be off-putting and even inappropriate. I can understand their point, as some of the bawdy comedy does seem to come out of left-field. And yet, I can’t help thinking about what I’ve learned about Lincoln’s sense of humor over the years. It seems to me that he would actually appreciate the irreverent take on his life and legacy, particularly as it highlights the elements of human nature that Saunders explores, here, including fear, sexuality, death, mental health, and loneliness. It is safe to say that I did not know what to expect of Lincoln in the Bardo, even after reading the description and other reviews. Then, when reading the book, it somehow managed to be even more different than I thought it would be. In this way, I think, it deserves all the praise it has received as a contemporary masterpiece and a novel approach to, well, the novel. I was also thrilled that Saunders explored a lot of contemporary issues that are actually historical, yet would have been “taboo” for discussion in Lincoln’s time

I have been reading much more non-fiction, lately, including history and philosophy. I stumbled upon Christopher Phillips’s Socrates Café while perusing the philosophy section of Barnes & Noble for contemporary overviews (I’ve been in a kind of “self-help” exploratory approach to the history of philosophy, I guess.) Despite reading the blurb, this is another book that caught me slightly off-guard and was not what I had expected. It is in many ways a reference guide to creating your own Socrates Café, something I had never considered and yet left the book feeling, “well, why the hell not?” I loved Phillips passion, though I did sometimes feel like the examples he gave from his own cafes around the country seemed a little far-fetched. Maybe they did happen, I don’t know, but he himself says that most of this was reconstructed after the fact, so I can’t help thinking he added a bit more flair and impressive insight than might have occurred originally. (So many of his café participants seemed to know so much about philosophy, for example, and could quote a range of philosophers from memory.) In this way, I found the book might be setting false expectations for people who are using it as a guide to beginning their own Socrates Cafe. That said, as a generally interested reader, one who is on his own journey to learn more about ancient philosophies andto think more thoughtfully about the current world, this book does an excellent job of putting the two together. In the end, it did make me want to get out there and engage with other thoughtful people, to ask big and small questions without expecting concrete answers, and to wonder gleefully about all manner of things. I think, then, Phillips does what he set out to do: make philosophy exciting again.

I Felt a Funeral, In My Brain by Will Walton 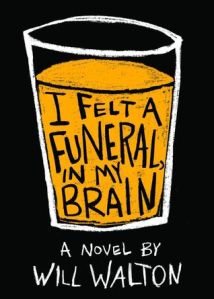 Like Lincoln in the Bardo, Will Walton’s young adult novel about grief and loss, I Felt A Funeral, In My Brain, is a creative approach to narrative (and verse) fiction. It was also not what I expected from the blurb and from reading other reviews, and yet somehow ended up being much more satisfying, much more curious, than I imagined it would be. I’ve been let down by “hype” on too many occasions, as I think we all have, but in this case, I Felt a Funeral, In My Brain lives up to the hype without necessarily living up to expectations. I’m not sure how to clarify that except to say, even though the book did not meet my expectations, I ended up appreciating it and what it does in ways that I hadn’t anticipated. This is mostly due to its construction and to the fact that, somehow, Walton manages to create that sense of grief in his text, the confusion, the sense of drowning, the psychological wandering we do when we have lost someone important to us. There are a lot of books about grief and loss, some of them are beautiful in the way they treat the subject or in the language they use to explore it. Walton’s is beautiful because, inexplicably, it simply reads like the experience of grief. I think back to a time when I most felt a terrible loss and can easily connect those feelings to the way this narrative is told and the way it unfolds, in choppy segments, in distant characterization, and in the interplay of concrete prose and transcendent verse. My only personal critique was that I felt, sometimes, like some of the segments read as if they were creative prompts inserted for the sake of it, and not as if they developed along the course of this particular story. That said, I Felt A Funeral, In My Brain, is a special book that explores a difficult topic in a unique way. It is unlike anything else on the market this year.