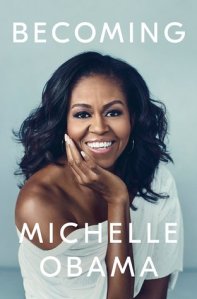 The first book I read in 2019 was Michelle Obama’s honest and compelling memoir, Becoming. To be honest, some part of me expected that the book would focus primarily on her time as First Lady; I was pleasantly surprised, however, to find that, instead, the memoir is a more balanced retelling of her entire life, from childhood to post-White House. As I was reading it, I couldn’t help but marvel at her style, eloquence, and personal experiences, while simultaneously thinking: just imagine the book she could write specifically about her time in the White House. So, while I originally approached this book desiring a little more of the politics than it delivers, I was nevertheless swept up by her story, happy to learn more about her life and roots, and ultimately more than satisfied with the comprehensive life story she provides.
For me personally, part of the fun was reading about Obama’s life in Chicago. Having grown up in the Chicago suburbs, it was a treat to read about her time on Euclid Avenue and in Hyde Park, as well as some of the other recognizable places she mentions. That said, the familiarity created for me as a reader who knows the area is not, I think, limited to readers from Chicago. This is because she writes in a way that is relatable to anyone growing up in any similar neighborhood, and there are so many like it across the United States. I think her relevance to larger audiences comes across many times in the memoir, as when she visits a girl’s school in England and finds that her experiences, and theirs, are surprisingly similar. She’s able to be a role model to a nation of young women growing up thousands of miles away, because the life Obama has lived, and her outlook on society and the future, makes so much universal sense.
I also enjoyed the traditional “three act” design of the book, which begins with “Becoming Me,” is anchored in “Becoming Us,” and ends with “Becoming More.” Anyone who is interested in learning more about Michelle Obama as a person, not just a politician’s wife, will likely find this structure appealing because it demonstrates clearly how Obama become who she is, not just in the context of her remarkable marriage, but through the many people, professions, educational opportunities, struggles and personal successes she has had. It should not be surprising that Michelle Obama has a unique perspective on life, nor that she must have led an interesting one herself, but what might impress readers most is how thoughtful she writes about it, how deeply she connects the past, present, and future events of her life, and how remarkably she can reflect on the positive and negative moments in her life in order to look, constantly, toward a better future.
It’s also a treat to read such an intimate portrait of such a public figure. She treats her family, friends, and spouse, as well as their political allies and rivals, with honesty and fairness. She describes moments of joy and betrayal and provides a behind-the-scenes description for many of the moments that so many Americans must wonder about all the time. One of the most impressive elements of her memoir is this level of candidness. She admits mistakes, she reveals real marital struggles and personal upheavals, and she explains how exhausting and disorienting it was to feel that her sense of self was vanishing as the rising trajectory of her husband’s career skyrocketed. One can only imagine the strength it must take for anyone in this position, and perhaps those who read Obama’s account of it will be more patient and considerate of political families across the spectrum.
Ultimately, Becoming is just about everything one would hope for in a memoir, pictures included! It is honest, fair, funny, interesting, and comprehensive. Obama invites readers into her remarkable life and doesn’t try to hide or misrepresent that life in any noticeable way. She also invites more questions and, for me at least, a hope for future works that explore some elements and eras of her life in even more detail.
Notable Quotations

“Now I think it’s one of the most useless questions an adult can ask a child—What do you want to be when you grow up? As if growing up is finite. As if at some point you become something and that’s the end.”

“If you don’t get out there and define yourself, you’ll be quickly . . . defined by others.”

“For me, becoming isn’t about arriving somewhere or achieving a certain aim. I see it instead as forward motion, a means of evolving, a way to reach continuously toward a better self. The journey doesn’t end.”

“Everyone on Earth, they’d tell us, was carrying around an unseen history, and that alone deserved some tolerance.”

“Your story is what you have, what you will always have. It is something to own.”

“It hurts to live after someone has died. It just does. It can hurt to walk down a hallway or open the fridge. It hurts to put on a pair of socks, to brush your teeth. Food tastes like nothing. Colors go flat. Music hurts, and so do memories. You look at something you’d otherwise find beautiful—a purple sky at sunset or a playground full of kids—and it only somehow deepens the loss. Grief is so lonely this way.”

13 Comments on “Becoming by Michelle Obama”