Abdi Nazemian’s young adult historical fiction novel, Like A Love Story, is the fourth LGBTQ-themed book I’ve read this month. Like the others, it has not disappointed. Every good coming-out-story, like every good coming-of-age story from Little Women to The Catcher in the Rye, manages to do this, to balance a personal, individual story with a unique experience in time and place and the larger issues this entails. What the author does best in this novel is to integrate powerful and accurate portrayals of two difficult events, the Iran revolution and the AIDS crisis, into a story about an immigrant boy’s coming-of-age and coming out. Magically, it is all held together by the unlikeliest but most appropriate of figures: Madonna.

Reza is that immigrant boy. He arrives in New York City, by way of Canada, after his family flees Iran. Reza has always been the good boy, the one his mother can depend on, while his older sister has always been the rebel and troublemaker. But when Reza meets the beautiful punk photographer, Art, and his best friend Judy, everything changes. Reza is thrust into a world that values independence and individuality, and into a sphere that is fighting desperately to survive. Judy’s uncle Stephen is dying of AIDS, and through his example of activism, friendship, patience, and counter-pop culture, Reza, Judy, and Art learn to thrive, to live, and to love.

Like A Love Story is not only a beautifully-written young adult novel, but it is a historically and socially important one. Nazemian reminds the reader just how hard gay and lesbian people had to fight to win their freedoms and equal protections, a fight that continues to this day and that is constantly under attack. The author includes several important historical lessons, weaving them seamlessly into the story of these characters’ lives, so that readers who give this work a chance will find themselves learning critical history that is often overlooked, forgotten, or under-appreciated, while at the same time enjoying an excellent story. At the heart of it are themes of friendship, forgiveness, and first loves, as well as first losses and the reality of mourning. These very human themes are so universal that the reader, while connecting with the fictional of it all, might find themselves relating to a story well beyond their own lived experience.

This is one of the most important and illuminating LGBTQ novels published in recent memory.

Symptoms of Being Human 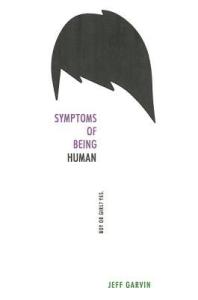 The fifth book I read for Pride Month is Jeff Garvin’s The Symptoms of Being Human, a young/new adult novel about a gender fluid protagonist’s coming-out experience. Riley Cavanaugh’s father is a conservative politician in a conservative Orange County, California district, in the middle of a re-election campaign. Riley’s mother is kind and well-meaning, but much of her time is devoted to her duties as a politician’s spouse. Just as the election season is heating up, Riley suffers a kind of panic attack at an important event, after which they are hospitalized for attempted suicide. To ease some of the tension, Riley transfers out of her private Catholic school, where they were tormented, to a public school, where they hope to be better treated. Unfortunately, high school is still high school, conservative areas are still conservative areas, and plans often go sour.

While Riley struggles to figure out who they are, some days feeling like a girl and some days like a boy, and other days not like either one, they also navigate the process of healing from self-harm, dealing with anxiety, hiding a powerful secret from their parents and, let’s face it, an entire district that has the Cavanaugh family under its microscope, and trying to make friends, or at least avoid making enemies, at a new school. Any one of these conflicts would be difficult but trying to deal with all of them simultaneously is beyond unlucky. To help, Riley’s therapist suggests that they start a blog and share privately and anonymously what cannot be shared publicly. To write is Riley’s true therapy, and as it turns out, they are very good at it. Ironically, this talent is what causes the largest crisis of all.

Somehow, Riley finds themselves with a popular blog that only grows in popularity as its presence is picked-up by one of the largest LGBTQ community websites online. Riley receives thousands and then tens of thousands of followers and is bombarded with comments of praise, questions for advice, and plenty of hate mail, too. Eventually, Riley’s identity is discovered, right around the time some of the advice they have given to a transgender teen goes terribly wrong, and suddenly they are thrust, with their secrets, into the glaring spotlight that is a political election season.

The major climax itself did feel unnecessary to me, in an almost troubling way. In my reading, the event felt manufactured to fit a gap in the construction of the narrative, rather than necessarily and organically manifested by the sequence of the story itself. It is also a device so often used in stories of sex/gender diversion that, at this point, it has become cliché. This is not to say the problem is not real, because it is very real and all too common, but the introduction and handling of it (and particularly the “fall out”) are even more important for that reason. This is the one element that pulled me out of an otherwise truly engaging, interesting, and important work that deals with gender fluidity, family, hate crimes, coming-of-age, and mental health.

One of the most incredible things about Symptoms of Being Human is that the author manages to treat Riley Cavanaugh’s gender fluidity with complete honesty throughout the course of the narrative. It is never revealed whether the protagonist was born biologically male or female, nor what their parents assume to be Riley’s sex or gender. This is an impressive feat. The story is well-paced, moving slowly and thoughtfully through the complex areas, then speeding up rapidly during moments of intensity. I was able to read the entire thing over the course of one round-trip flight, and rarely did I want to stop to put it down.

I’m currently reading Jane DeLynn’s DON JUAN IN THE VILLAGE, which will be my 6th book for Pride month (this one features a lesbian protagonists sexual experiences around the world), completing my planned reads for the month, though I hope to get one more snuck in under the wire. DON JUAN is also a book on my 2019 TBR Pile Challenge List. Check out my thoughts on earlier Pride Month reads, ON EARTH WE’RE BRIEFLY GORGEOUS as well as GEMINI and HOLD MY HAND.