During the academic term, I typically find myself reading a lot of young adult fiction. Young adult fiction, while often tackling very serious real-world issues, also tends to be highly readable for a lot of reasons, not the least of which is its reading level. These novels are often well-paced, logically divided, and supported by compelling storytelling. All of this works favorably, for me, because it allows me to keep reading even when I’m mired in heavy teaching workloads, committee work, service, and my own research/writing. That said, lately, I’ve found myself being less interested in many of the young adult works I’ve been reading. I’m not sure if this is because I’ve read too much of it and so I feel bored or over-saturated by formulas, or if its because I’m not in the right place to be reading and relaxing at all, so I become less able to concentrate, whatever the story or its potential. Today, I would like to share some thoughts on four young adult/middle grade novels that I did enjoy on some level.

EXILE FROM EDEN by Andrew Smith

Exile from Eden is the sequel to Andrew Smith’s wildly popular, Grasshopper Jungle. It takes place nearly two decades after the events of the original novel, returning us to Iowa and the Sczerba family. In this installment, however, it is the children, now teenagers, of the original cast who are the protagonists. For years, the unstoppable grasshoppers have wreaked havoc on the United States, and possibly beyond. The world has essentially come to a post-apocalyptic standstill, where almost all technology, communication, and modern amenities have been ended. There is no government, no society, and in fact almost no human beings. This is the world young Arek, and stowaway Mel, enter when the leave their hole at long last, in order to search for Areak’s fathers.

What Andrew Smith continues to do so well in this novel is to describe children in the most unlikely and yet all-too-familiar of circumstances. While the environment and the events of Exile from Eden are mostly unimaginable, his characters’ responses to them, their search for family, identity, and self-worth in the face of the most severe obstacles and challenges, internal and external, are wholly relate-able. Breakfast, the wild boy who is born into the post-apocalyptic world, is an interesting contrast to the “civilized” people who existed before the cataclysm, and it is no surprise that Smith seems to be suggesting that we could, all of us, do with a return to human nature and our basic instincts, primarily the principle: to live and let live. To defy judgement. To be true to yourself. While I enjoyed Grasshopper Jungle quite a bit more than its sequel, fans of the original novel are likely to enjoy this one too.

Wayward Son is the sequel to Rainbow Rowell’s delightful Harry Potter-inspired novel, Carry On. (If you’re sensing a theme in these titles, good on you!) I was a huge fan of the original work, in how it reveled in Harry Potter fandom and yet was something entirely original, too. In Carry On, Rowell reimagines the cast as somehow more jaded, more human, and of course adds some interesting and desperately needed realistic characterization, such as openly queer characters and romances. Wayward Son picks up not long after where Carry On ends. While one could call the finale to Carry On happy, or at least successful, Wayward Son makes clear that every choice has its consequences, and the tone throughout this second installment is much bleaker.

Simon Snow, Baz, Penny,  and Agatha are back again in Wayward Son. The Chosen One has fallen quite significantly, and now lives as a deformed humanoid, without power. His boyfriend, Baz, is at a complete loss as to how to help Simon heal and find himself again. Enter Penny, who comes up with a brilliant idea for an American roadtrip, where they will visit her boyfriend Micah (that doesn’t go according to plan) and their good friend Agatha (oops, this is sticky, too!) Along the way, they encounter a number of mythological creatures, some good and some bad, endanger themselves and others, and begin to repair, or sometimes end, relationships that have long needed attention. In the end, the power trio, with a surprising new companion, manage to save the day. Simon Snow, with a long road ahead of him, begins his steps toward healing. Wayward Son isn’t as enjoyable as Carry On, for me, but perhaps it is a logical next chapter in the lives of Simon and Baz.

THE TYRANT’S TOMB by Rick Riordan

The Tyrant’s Tomb is the 4th installment of the 5-book series, The Trials of Apollo, and it is one of the strongest in the series. In this installment, Apollo (or Lester Papadopoulos in his human form) and Meg, his master and sidekick, head to Camp Jupiter in the San Francisco area, having helped save southern California from being completely scorched by a triumvirate of vengeful, power-hunger former Roman Caesars, including Caligula, Nero, and Commodus. This time around, Nero and Python are on the sidelines, and Caligula and Commodus come to take over Camp Jupiter, with the help of an evil king, Tarquin. As in previous installments, there are mysterious prophecies, talking arrows, loads of sarcasm, old friends and new, and not a little bit of romance. Most importantly, we continue to see Apollo-as-Lester come to terms with what it really means to be human and to experience shame, even guilt, at the way he once acted as a God.

Part of why I love the Rick Riordan books, particularly those post-Percy Jackson, is because of what they do for diverse representation. Riordan seems to have made it his mission to fairly and empathetically include as many different times of people as he can, in completely natural ways. Many of his books have included gay and lesbian characters, characters of color, and differently abled characters, and yet this diversity never reads as tokenism; instead, these individuals are included seamlessly as part of the cast, and their development is typically treated in holistic and believable ways. Apollo, for example, is historically “bisexual” (in today’s terminology), so his romantic interests in men and women are often included, but Riordan also introduces the sexuality, or lack thereof, of different characters in ways consistent with the plot. One character in this installment, for example, is ultimately revealed as what we might call asexual or aromantic, but rather than simply stating these terms and getting into some bizarre description, this aspect of her personality is described through plot events and ultimately by a decision she makes at the end of the story. Riordan’s sensitive, warm embracing of the great variety of humanity and human experiences makes this book, which is already entertaining, fast-paced, action-filled, and hilarious, important and meaningful on another level.

ZIGGY, STARDUST & ME by James Brandon 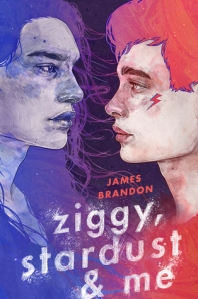 I finished reading Ziggy, Stardust & Me way back in August, but it has taken me until now, four months later, to decide to try and write something substantial about it. My reluctance has been due to the fact that this is one of the best books I read all year, perhaps one of the best in a very long time. I feel reluctant saying that because I know such a statement might suggest that I speak objectively for any reader, but I want to provide a caveat that I felt this book very personally, and I cannot say for sure how everyone will react to this one. Only two other books, Shaun David Hutchinson’s BRAVE FACE and Becky Albertalli & Adam Silvera’s WHAT IF IT’S US have affected me in a similar way, and I know that my thoughts on those two, while generally agreed with, were also very personal and perhaps didn’t carry over to every reader. That said, I do think it goes without saying that, as a topical, current young adult novel with important things to say about family, racism, indigenous peoples, and abuse, not to mention sexuality and coming-of-age, Ziggy, Stardust & Me is a stellar achievement.

The story takes place in 1973. At its heart is sixteen-year-old Jonathan Collins, a gay high schooler who is struggling with his identity, not just because coming out is difficult for everyone, but because he lives in a time and place when homosexuality was still considered deviant, a mental illness. Jonathan is subjected to dangerous psychological treatments, now debunked, and the disapproval of his single, alcoholic father. While dealing with these serious issues, he meets a young man, Web, a member of the Lakota tribe. Suddenly, Jonathan is swept up in romantic feelings he had been desperately trying to stifle or change, and he must also learn what it is like for a native person to live in a white America that remains terribly prejudiced and violent. Despite their differences–race, economics, religion, family, etc.–Jonathan and Dakota connect on a deeply personal, almost spiritual level. Their relationship begins to bring out the best in each of them, and as they cling to each other, they begin to heal and to understand the two separate worlds from which they both come. Ziggy, Stardust & Me is a beautiful told, wonderfully researched, deeply sensitive treatment of young adulthood, race  and class, sexuality, and interracial romance.

← Find Me by Andre Aciman
The Final Checkpoint! #TBR2019RBR →