To a God Unknown 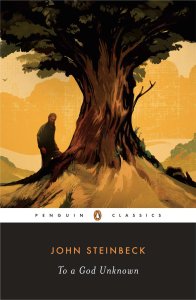 This is going to sound selfish, but the thing I love most about reading John Steinbeck, whether I’m reading him at his “best” or his “worst,” is that I always find reassurance that my love for Steinbeck, my relationship with him as a writer and a thinker, is a strong, good thing. It is something that must be.

To a God Unknown is one of Steinbeck’s more difficult novels and certainly not my favorite. And, while it’s not very long (about 180 standard pages), it took me quite a while to get through it and not, this time, because of work or other obligations that always distract and tire me. No, this one is just a little more challenging in what it asks of the reader, in the way that it challenges the reader to think and to feel. Imagine the raw, dental root nerve of Ernest Hemingway’s deepest emotion made explicit through the voice of, say, a late Mark Twain, at his most jaded. That juxtaposition of raw feeling with total world-weariness permeates every word on every page of this Steinbeck novel, in the way that his more popular works, like The Grapes of Wrath and East of Eden, suggest more subtly and with some courageous hope.

The story tells of Joseph Wayne, a young farmer raised a protestant Christian in New England, who has a strong desire to move west and be with the land, to claim land of his own even though he is due to inherit his dying father’s prosperous farm on the east coast. As events unfold, Joseph’s connection to the land, his yearning for it, becomes more central to the plot and to his life, until he has thrown off Christianity entirely and has adopted a more pagan belief system. Ultimately, Joseph’s success is no match for his devout Christian brother’s fears and prejudices; when his brother sabotages the idol that Joseph has instilled with their father’s memory and spirit, the family’s blessed and prosperous days come to an abrupt end. Ironically, Joseph’s story echoes the Christ story in many ways, including in the importance of the trinity and in sacrifice, but whether that ultimate sacrifice is for the land or the people is much less clear than the biblical version’s.

Steinbeck wrote that it took him five difficult years to develop this novel, and that it was perhaps the most challenging story he ever had to write. Considering the audience of the time, it is no stretch to imagine that he was deeply troubled by how a book like this, one that at the very least offers alternatives to Christianity and, perhaps, might suggest that other belief systems are better, would be received. Part of its genius, though, is in its tragic ending. Like the great epics of classical Greece, a reader might take the finale of To a God Unknown in a number of different ways. There are three that come to mind, for me, each of which suggests an entirely different way of believing and of being in the world.

While this tale might not be as deeply human or affecting as Grapes of Wrath or Of Mice and Men, or even The Pearl, it nevertheless does what Steinbeck’s works always seem to do: challenge the status quo. Encourage the reader to question what she knows. Desperately plea with us to be a little bit better than we were when we picked the book up and began to read it, better to ourselves, better to the land, and better to each other.

“It’s a long slow process for a human to die. We kill a cow, and it is dead as soon as the meat is eaten, but a man’s life dies as a commotion in a still pool dies, in little waves, spreading and growing back toward stillness.”

“The first grave. Now we’re getting someplace. Houses and children and graves, that’s home, Tom. Those are the things that hold a man down.”

“I do not know whether there are men born outside humanity, or whether some men are so human as to make others seem unreal. Perhaps a godling lives on earth now and then. Joseph has strength beyond vision of shattering, he has the calm of mountains, and his emotion is as wild and fierce and sharp as the lightning.”

“Everything seems to work with a recurring rhythm except life. There is only one birth and only one death. Nothing else is like that.”