Dear Diary: May 6, 2020. I guess it’s fair to say that I’ve been going through something. As the Indigo Girls so rightly sing, “Darkness has a hunger that’s insatiable. Lightness has a call that’s hard to hear.”

It’s a stressful time and we’re all trying to handle it as best we can, but I find all sorts of problematic things happening. My moods seem to come in waves, with minor “up” times and long-lasting “down” times. On the bright side, I have gotten back into a regular exercise routine because I’ve been feeling better for the last month or so, as far as physical health goes. The treatment they put me on seems to be working; something for which to be grateful! But it’s clear that I’ve been missing my students (in person) and that totally online teaching is not for me. As of today, I’m also scheduled for an online schedule in Summer and in Fall 2020. Better safe than sorry, but I’m going to be completely redesigning my classes so I can at least get virtual face-time with my students.

I’m also tired of social media. I keep saying that, I know. But for all its perks and possibilities, it mostly just depresses me. I continue to see people at their absolute worst, and I honestly can’t take it anymore. So, I’m getting rid of Twitter and Facebook by end of the week. I’ve already made both private. I’ll keep Instagram because I love seeing peoples’ photos and keeping up with their lives that way, but otherwise, I’m focusing on my writing from here forward. That’s that! (Reader, he did not focus on his writing.)

Does anyone else wonder what has happened to us as a species? I was trying to have this conversation on Twitter last night, but I feel like no one really engages in social media anymore, except to complain or bash other people. Or “cancel” them. It’s definitely not what it used to be, and I don’t know if that’s because of what’s happening right now with the pandemic or because of how we’ve changed as a people. Or maybe it’s just me?

Anyway, I’ve been thinking a lot about the way we treat each other; perhaps mistreat is the better word. For all our desires for “self-help” and focusing on living up to our potentials, promising that everyone has a chance, etc. etc., it seems that we’ve come full circle into a culture not of support or positivity, but of complete narcissism. Me, my, I. Look at these people shouting down healthcare workers in the middle of the street; people are putting their lives on the line, and you’re out there screaming in their face because you can’t get a $50 haircut? Who are we, really?

I know, I know. You’re probably reading this thinking, “that’s not me!” And you might be an exception. I might be an exception. A lot of us, I know, love very much and very deeply, and we really do want what’s best for people, not just ourselves. But we are we. This world as it is spinning out of control is spinning out of control because of us, and that includes you and it includes me. We’ve either been too passive, too apathetic, or (some of us — okay, not you and not me) we’ve been too actively antagonistic, selfish, and self-involved. I’m at my wit’s end. I think we’ve reached the end of our human experiment. I think we used up all of our chances. I don’t see a path back from this, really, and the only consolation I have, in the deep, far reaches of my subconscious, are tiny little reminders that other people have felt this way in other very difficult times in human history. That’s the only nod to perspective that I’ll make, because mostly, I feel absolutely helpless and almost completely done with it all. (Sorry, the cheer has gone.)

Hey, that’s not bad for a month’s reading! I just realized, though, that I haven’t touched my BACK TO THE CLASSICS challenge list. Drat! Fortunately, I don’t have to do any re-reading this summer (for courses I’m teaching), because I’ve recently read everything I’m assigning. My general rule is, if I’m assigning it to a class but haven’t read it myself in the last year, then I need to go back and re-read. Anyway, I’ll devote some time and attention to my B2TC list this summer. Maybe I’ll start with Little House on the Prairie. What do you think? (P.S. Did you know Goodreads has added “setting” to the book description area? That’s freaking awesome!)

Currently Reading: Mark Doty’s Fire to Fire (poetry); The Age of Atheists (nonfiction); and just beginning Ta-Nehisi Coates’ The Water Dancer (fiction). I’m almost done with The Age of Atheists and it has been pretty wonderful. Really enlightening, though I feel like it’s just a jumping-off point for a lifetime of learning. Isn’t everything? Doty’s poetry always gets me going and I’ve really been enjoying some of this collection in particular. He has a set of themed poems running through it, too, which will be fun to write about at some later time. And I’m on PAGE 1 of The Water Dancer, so I can’t say much about it except that I’ve been looking forward to it. Have you read it? What did you think? 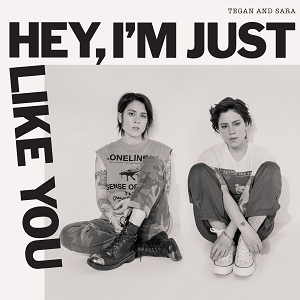 Currently Listening To: Tegan and Sara, Hey I’m Just Like You (2019). Tegan and Sara are wild and brilliant and fun. They’re one of my favorite bands for good reason, and this, their ninth studio album, is their second-best after their 2004 release, So Jealous. Both albums are of the don’t-skip-a-single-song variety, which is the only kind of album worth listening to, isn’t it? At the moment, I’m spinning, “Don’t Believe the Things They Tell You,” one of the psychologically darker of the album, though just as honest and blunt as every single track on this one. “I don’t want to be a liar / But I do it every day / I don’t want to be so tired / But I can’t sleep any way.” I suppose any song about insomnia pulls at me, but with a haunting melody that reminds one of those three a.m. automatic writing sessions, this one stands out.

Teaching Updates: This is the penultimate week of the semester and I’m ready to breathe one big sigh of relief. There’s been a lot that has been absolutely inspiring about this term and these groups of students, but so much that has been completely and utterly exhausting. I won’t have much time to relax or recover between the time when spring term ends and the summer term begins, but I’ll find a way to use that time wisely. I hope I will, anyway. We’re thinking of moving, and that does not seem like a wise use of the time. Nevada hasn’t decided yet what will happen with schools, though UNLV and UNR seem prepared to open in the fall as usual; I think there may be some modifications, though, like smaller class sizes, hybrid classes, or an abundance of online courses. As for me, I was told that I could plan for whatever would be best for me, and what’s best for me is causing the least possible disruption for my students. And that means I’ll be online.

Current Status: We have 5,491 confirmed cases and 266 deaths. The Governor’s order is set to expire on May 15th but there’s some confusion because he joined the western states’ coalition, which is not prepared to open on the 15th. The Governor himself has said he wants to see a daily decrease in cases for two full weeks before considering reopening, but we’re not seeing daily declines yet. So, what does that mean? I have no idea. I think we will probably begin a very slow/soft reopening based on types of business and even those businesses that do open will probably have to operate under certain conditions that comply with social distancing. I thought I’d be dying for a haircut at this point but, to be honest, I might grow it out for a while. In any case, I’m glad my state is one with a Governor who listens to the scientists and the experts and who tries to do the right thing for peoples’ health and the economy. I just wish we could be doing more to help people in need; from what I understand, our state unemployment system is not even close to keeping up with the demand.

Positive Thoughts: Fine, here’s a nugget: I watched the new Michelle Obama documentary for Becoming this morning. She ends on a message of hope. If she of all people, having been through what she has and treated the way she was, can still be hopeful, then I can try to do the same. At least for a moment, and maybe that’s the only way. Try this moment. And then try again the next.